We all know folks at LEGO loves a good party. I mean, we’ve all seen the celebratory CMF Series from last year, right? And I’m not even going to go into the anniversary sets – Star Wars, Steamboat Willie, Friends, Batman… ok, so the Batman sets may not be as good as they could have been, but the others are pretty awesome. Not to mention the minifigures that came with some of them… from all of these, we can assume that the designers really enjoy making celebratory minifigures. And what’s a celebration without a costume? So today, we’re going to take a quick look at LEGO animal costume minifigures.

When LEGO released the 40 Years of the Modern Minifigure series, otherwise known as the CMF Series 18, almost all of the 17 minifigures were wearing costumes. We had a birthday girl and a boy, a guy coming out of a birthday cake, and a clown to keep everyone entertained. There was also a harder-to-find policeman minifigure, in memory of LEGO’s first ever minifigure. But that’s it. Everyone else was wearing a costume. And for the first time, there was more than one animal costume minifigure.

An elephant, a cat, a spider, a unicorn and a dragon… that’s what we had in last year’s birthday party. Some were there to dance, some to meet new people, and others just wanted to have fun in their own way and make a mess – it is a party, after all.

However, it was not the first time we saw animal costume minifigures, no sir. They have been popping up here and there since CMF Series 3. Let’s take a look at what we have so far, shall we?

The Gorilla and the Lizard

Gorilla Suit Guy (CMF 3) was the first of many animal costume minifigures to come. He was shortly followed by Lizard Man (CMF 5). In the beginning, all Gorilla Suit Guy could think about was climbing high buildings and “ook”ing around. Similarly, Lizard Man was all about making his miniature cities and crushing them beneath his feet. Some may say they were acting very similar to two certain cinematic characters, here, and they wouldn’t be wrong! 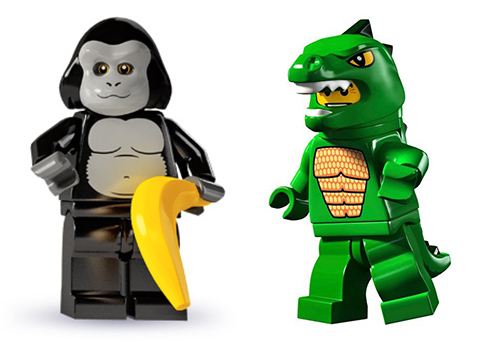 However, as time passed, they realized they had more in common than they thought. First of all, they both liked dressing as animals, even though it became real hot underneath all that fur and scales. Second, while Lizard Man liked crushing cities, he loved building them even more. Gorilla Suit Guy was such a fan of his cities, that he decided to learn from him. Before they knew it, all kinds of LEGO minifigures were coming from every corner of the world to see their creations. True, they still like to climb the occasional tower and wreck a dislike mini-city, but their creations are a feast for the eyes.

The Bunny and the Chicken 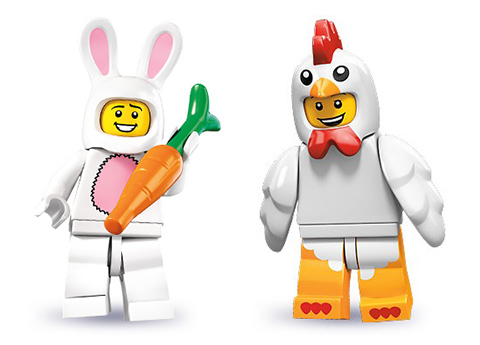 Their characters, which are also similar, made them leave whatever they were doing and dedicate themselves to make people happy. Now whenever there’s a crisis, be it a fight at a football game or a little girl who is sad, they go to there to solve the problem and make everyone happy again. And once every year, they meet to lay eggs and paint them!

Over the years, there have been others wearing similar costumes. However, they didn’t have what it took to make people happy. One of them was too brooding, and the other was downright bad! So all they can ever be are pretenders. 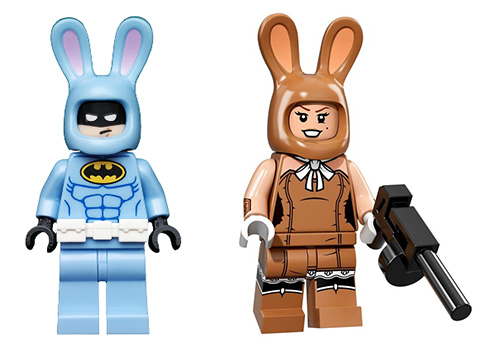 One interesting thing did happen, though. One time, when Bunny Suit Guy was painting one of the eggs Chicken Suit Guy laid, he felt a movement. Soon after, the egg cracked in his hands and a cute little chicken appeared! Neither of them have any idea how a “guy” can lay an egg that hatches, but they welcomed the Chicken Skater anyway (having a bunny for a best friend certainly didn’t hurt, either!) 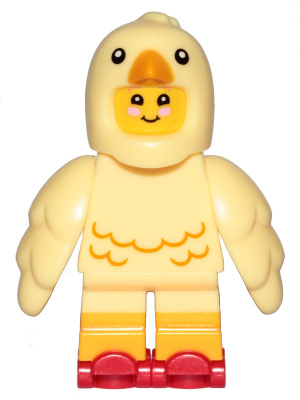 The Bee and the Flowe… oops, sorry!

But the color and mould of her accessories isn’t what makes her unique, it’s her personality. You see, when you want something bad – in her case, to be a bumblebee – you get in character and wait for others to accept you. It was very hard for her, though. Bumblebees aren’t known for their hospitality after all. But as time passed, they realized how serious she was at being a bumblebee, and welcomed her to the hive.

So “Patience, young grasshopper” does really go a long way.

The Pig and the Unicorn

Piggy Guy’s (CMF 12) and Unicorn Girl’s (CMF 13) stories aren’t very much different than the ones mentioned before. Remember the Farmer from CMF 15? Well, he’s actually Piggy Guy’s former self! Can you believe it? I certainly couldn’t. It appears that no matter how much you enjoy the countryside, working from dusk till dawn takes its toll after a while. So you shave your beard, put on a costume, and roll in the mud with the pigs. And hey, as long as you know you can go back to being a farmer whenever you want, who can judge you? 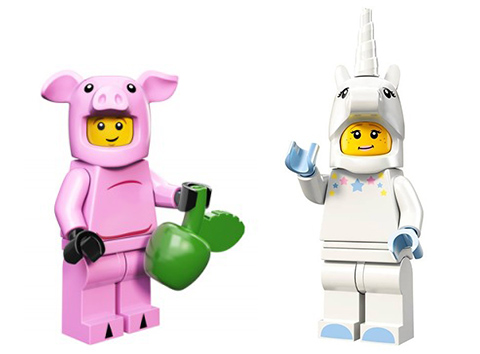 Unicorn Girl, on the other hand, has a very important mission. You see, there aren’t enough people who believes in unicorns anymore. It seems that kids stop believing in magical creatures at a very young age nowadays – must be all those mobile phones and “tube” channels they watch. So what she does is try to get more people to believe in them. How, you ask? Well, that’s easy. You wear a unicorn costume, and perform “magical” acts! Rose petals may rain from an apple tree, cats may walk on their hind legs (very well trained cats, that is), or toys may appear out of nowhere. Who’s responsible? Why, unicorns, of course!

The Shark and the Penguin(s)

Have you ever been so afraid of a sea creature that you couldn’t go swimming? Well, I have. Right after I saw Deep Blue Sea. No matter how much my friends insisted, they couldn’t get me near any kind of water. Of course after a while they couldn’t get near me either. You know, because of the smell…

Ok, ok, I’m kidding. But it seems Shark Suit Guy (CMF 15) suffered from the same fate as I did. In his case, however, his fear didn’t get the best of him. After being afraid for so long, he got curious and wanted to learn what he was really afraid of. The more he learned, the less he feared sharks, until one day he decided to show his appreciation for them by dressing up as one of them! 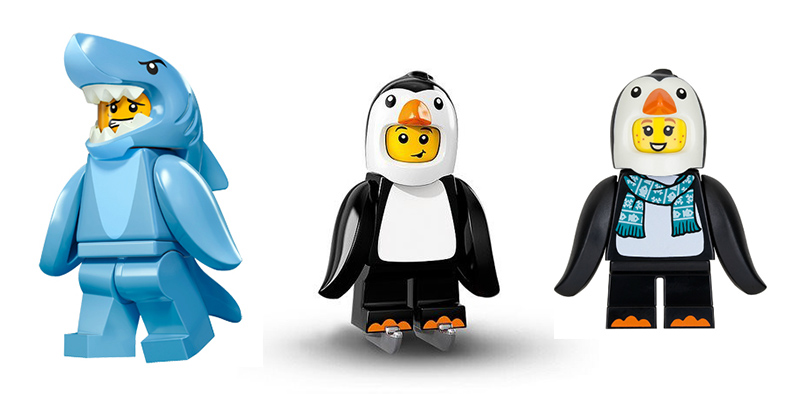 Speaking of fins… Penguin Boy (CMF 16) also uses them in black. Like many minifigures before him, he dreams of a better life, one where he lives in Antarctica as a penguin. He refuses to eat anything but fish, but he settles down for fish-shaped food. Fortunately, his parents are patient enough to make him sandwiches in the form of fish, so he can grow into a big, happy… penguin?

He has a sister, Penguin Suit Girl. While she isn’t part of any CMF series, it’s hard to ignore how similar they look. Wait, what do you mean all penguins look the same to us humans? So there’s a chance she isn’t his sister? Huh… I never thought of that… Oh well, she’s worth mentioning either way.

The Panda and the Giraffe

If you have read my previous CMF articles, you know that I usually don’t go into licensed themes. However, I want to make an exception here.

Panda Guy (TLM CMF Series) and Giraffe Guy (TLM2 CMF Series) are the most mysterious minifigures in costume. When I was looking through all the animal costume minifigures, I thought “Okay, so between Bricksburg and Apocalypsburg, many characters stayed the same but their appearances changed. Ms. Scratchen-Post, Abraham Lincoln, and President Business are a few of these characters. So somewhere along the way, Panda Guy changed his costume, too?” 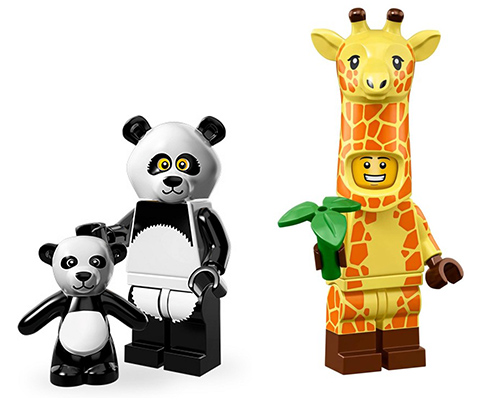 I later found out that this wasn’t the case. Both of them appear here and there in the movie. The reason I included them here is because they are minor characters, barely noticable if you aren’t paying enough attention. And nobody knows their stories! Can you believe that? All we know about them is Panda Guy is a master builder, and Giraffe Guy loves to dance. That’s it!

If you ask me, there’s something very strange going on here…

The Fox and the Bear

And speaking of strange… where did Fox Costume Girl (CMF 19) come from?? That’s right, the LEGO Movie 2!! Somehow she managed to sneak out of the TLM2 CMF series and into another one! Is it possible that she’s working a plot with Panda Guy and Giraffe Guy? You know, for animal costume minifigures to invade the CMF series? Conspiracy, anyone???

Bear Costume Guy (CMF 19), while looking very calm and peaceful, supports my conspiracy theory. It is the first time (apart from last year’s celebratory CMF series) that two animal costume minifigures appear in the same series. I have a suspicion that he is, in fact, Panda Guy in disguise. Sure, he seems to be all about rainbows and hearts, but what if two of them are working together for some evil plot? Oh my goshness, they’re going to make Giraffe Guy dance, aren’t they???!!

Ehm… I may have gotten carried away a bit. Don’t mind me, I’m just your regular conspiracy gal, throwing away my theories.

The thing is, I’m listening to the stories of all these animal costume minifigures, and do you know what I see?  Most of them have something in common: They weren’t happy with their old life, so they created a new one for themselves. Not only to make themselves happy, but to spread that happiness around. Now who would’ve thought wearing a costume would make so much difference?

So what do you think about the upcoming animal costume minifigures? Which animals should there be? I think we need a few insects. A praying mantis minifigure would be really cool! Or what about an ant minifigure, with a few extra arms on the back? More birds wouldn’t hurt, either. Imagine the classic parrot in minifigure form! Or how about an ostrich? Or an eagle? Or…

Let me know which animal costumes you’d like to see in the comments, will you? I’m going to go and take out my bear costume so I can escape my life, even for a short while. 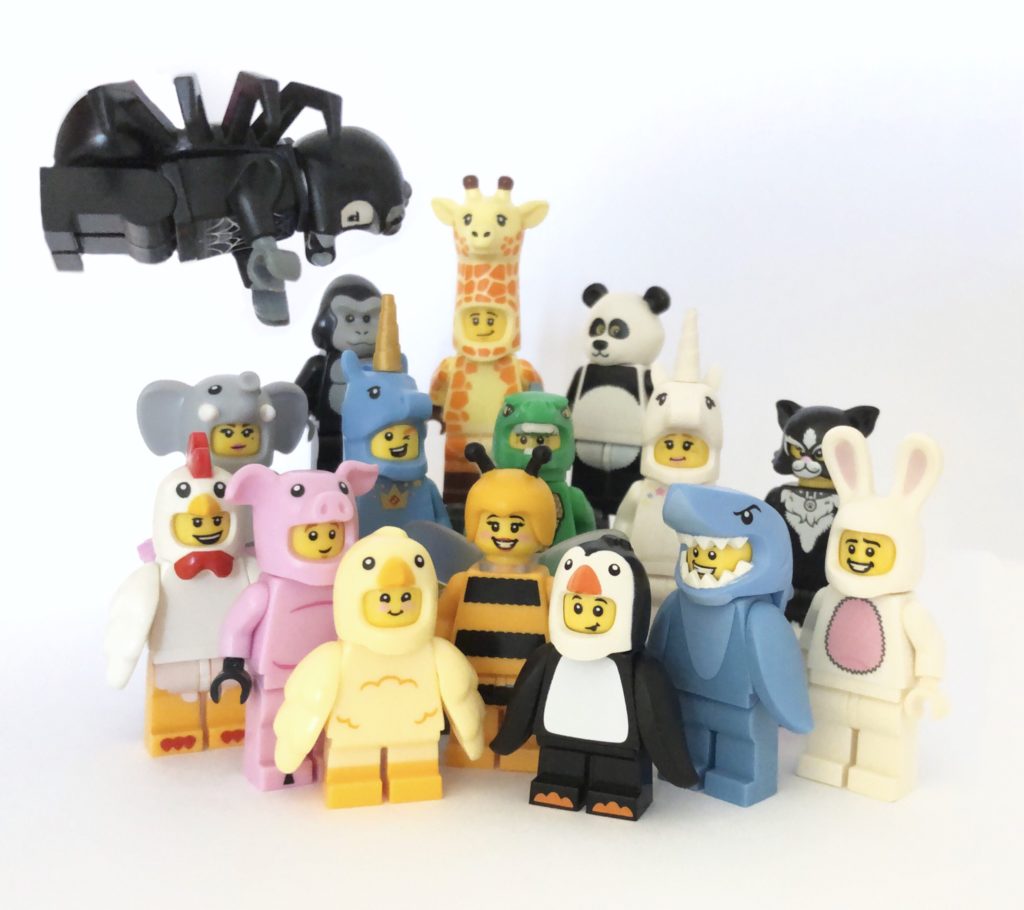 All images except the last one are taken from Brickset and Brickipedia.