This sounds way simpler than it is. To find the right pieces, you have to know exactly what you’re looking for – you might even want to look up what this character looks like online.  I’ll demonstrate by walking you through the basics of making a LEGO custom Ezra Bridger.

Now, you’ll need to find the right hair. The color is usually the easy part. If you have a large collection of LEGO hair pieces, it can be hard to pick the right hair style! For instance, Ezra Bridger has long, dark hair. But not too long! Severus Snape’s hair, from Hogwarts, seems like the perfect fit. 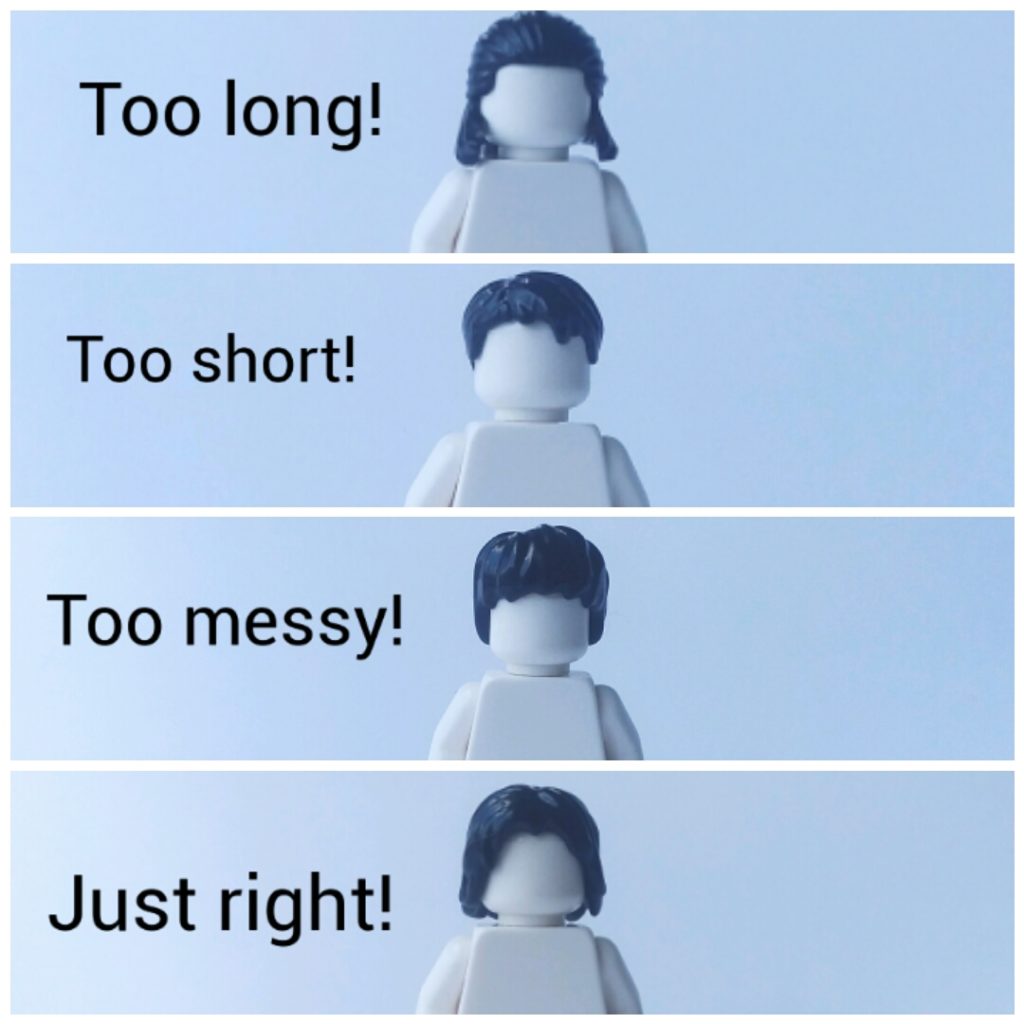 Now that you’ve chosen a hair, the next step is the face. Check the picture of the character. Do they have any distinguishing features? Lipstick? A beard? Freckles? Glasses? Ezra doesn’t have any of these, which makes it hard. So try to pick one that has a similar facial expression to your character. And remember to match the eyebrow color with the hair as best as you can! 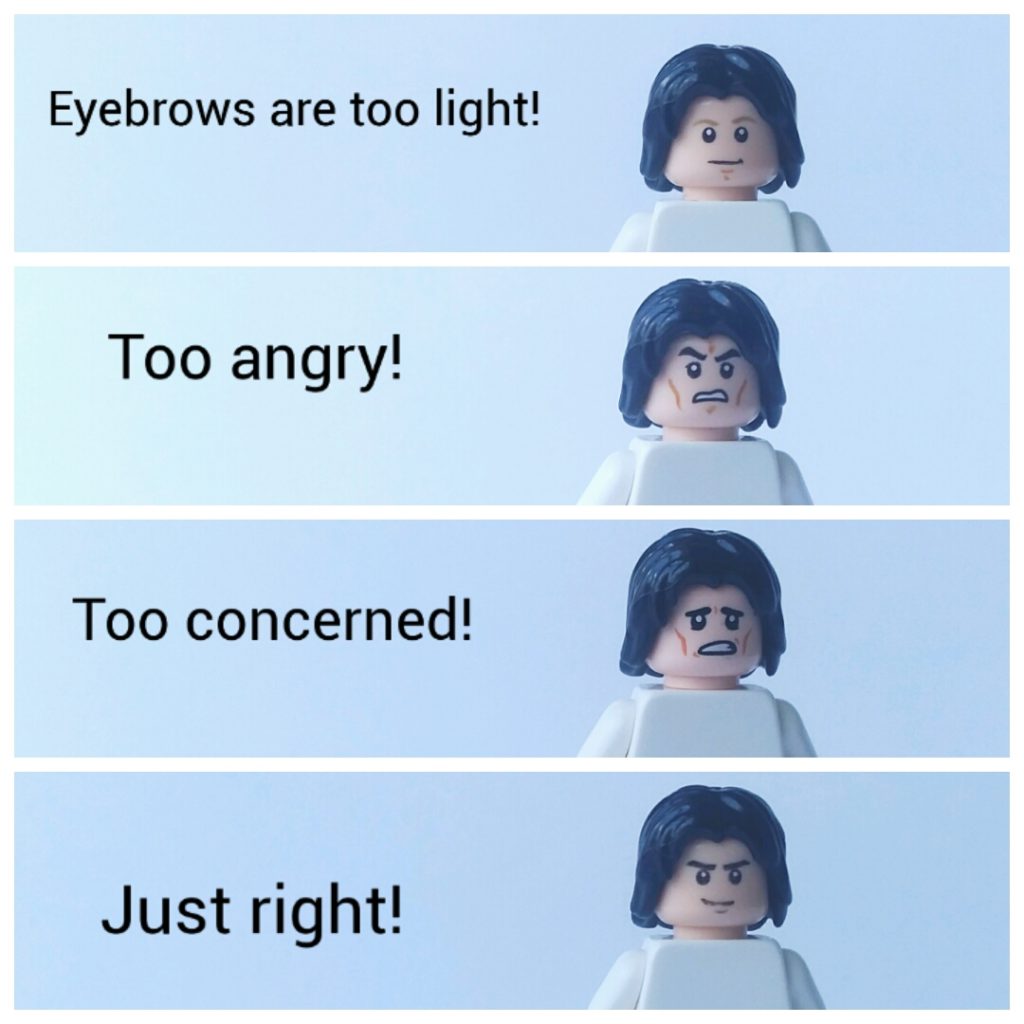 Alright, the head is done. Now move onto the body and legs. It’s important to look for the right color scheme and theme when finding a body. Also, make sure the body you use doesn’t have gratuitous markings that reference another character or distract from your goal. You can even play around with the hand, arm, and hip pieces.

Ezra Bridger usually wears an orange jacket. But if nothing orange is available, look for something with a similar color and idea. A tan jacket with a belt and pockets should do the trick! Brown and grey legs go well with most color schemes. If the character is more formal, try black instead. You may want to choose a piece with leg printing too.

You’re not done yet! Any good custom minifigure will need accessories. Are they carrying a weapon? Or maybe a book? Are they wearing a backpack, or do they don a cape instead? Ezra would carry his trusty blue lightsaber with him wherever he goes. It’s important to not leave out important details like that! Here’s a picture of the finished product: 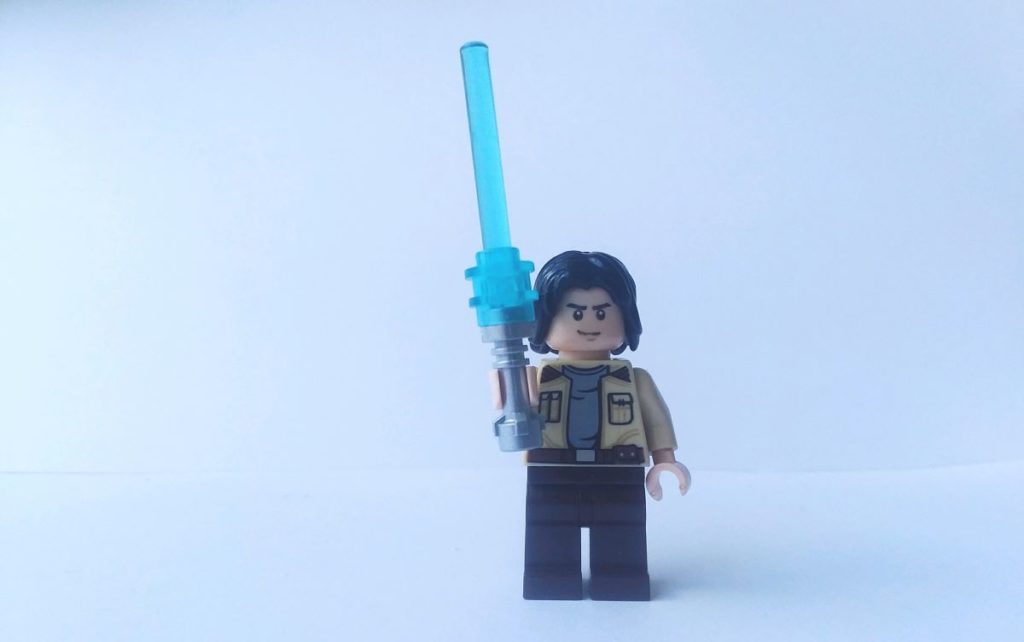 It can be hard to come up with ideas for LEGO Star Wars custom figures. They can be very difficult to make, as many of them have unique features that can’t be found in other pieces. The Last Jedi has plenty of human characters to work with, which are much easier to make than aliens. So let’s get to work!

First we’ll need General Leia Organa. Throughout this movie, she tends to have her dark brown hair in a braid or a bun. If you can’t find a piece like that, try some other formal-looking brown hair for her. Leia’s hair from the Imperial Shuttle Tydirium set (75094) should do the trick.

Next we’ll need a face. Leia has a very distinct look. She’ll need a confident smirk, but also a few wrinkles of concern from the past few years. The perfect face for that is Professor McGonagall‘s from set 4842.

For the body, we’ll need some kind of black or grey robe. It has to look formal – she is a princess, after all. For this piece, we’ll borrow from another figure in set 4842. Not McGonagall this time… Professor Snape’s torso seems perfect. Black legs would go well with this! And let’s not forget a regal black cape as a finishing touch…. 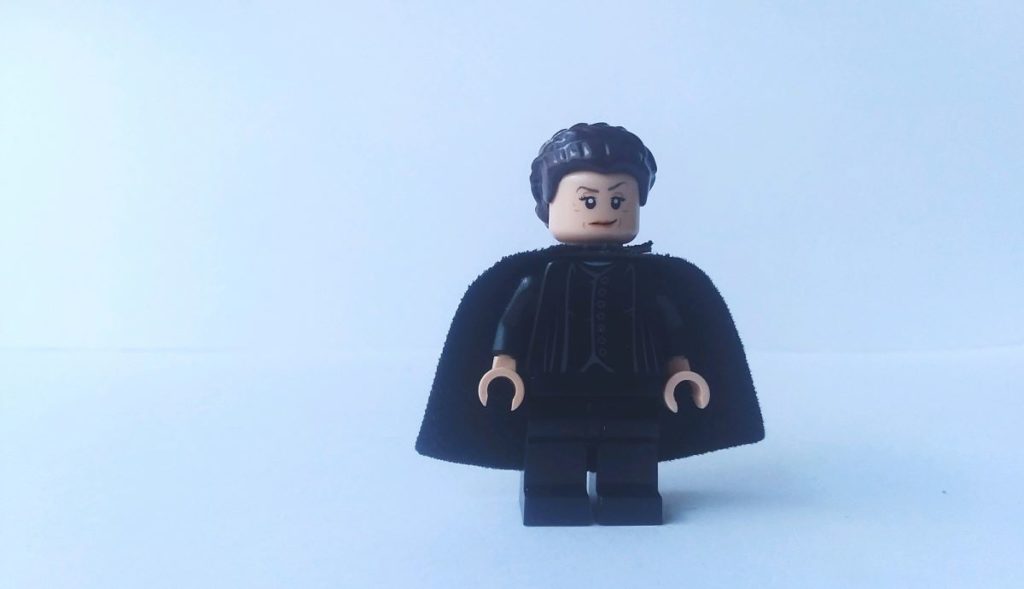 Luke Skywalker is a very compelling character in The Last Jedi because he not only appears as himself to train Rey, but he also makes an appearance as a force apparition to duel with Kylo Ren at the Battle of Crait.

He really let his hair grow out in The Last Jedi! It’s important to find a long, brown, messy hairstyle for him. Bonus points if it has a grey streak in it! I’ll use Pippin’s hair from the Mines of Moria LEGO set (set 9473).

For the face, you’ll want an aggravated face with plenty of care-worn wrinkles as well. Make sure to include a beard similar to the hair color! How about Theoden’s face from set 9474-1?

Luke usually wears his iconic Jedi training outfit. But what if you don’t have it? You can always use a training outfit from another Jedi, like Obi-Wan Kenobi or Anakin Skywalker. Sharing is caring, after all! In fact, Obi-Wan’s Jedi tunic looks similar to Luke’s, so how about we add that. Remember to replace his right hand with a black glove!

Now for the finishing touches. He’ll probably wear a brown or grey cloak to protect from the cold wind. If you want, you could even add a brown hood instead of his messy hair. And don’t forget his old light-saber! (Although, he might just toss it behind him!) 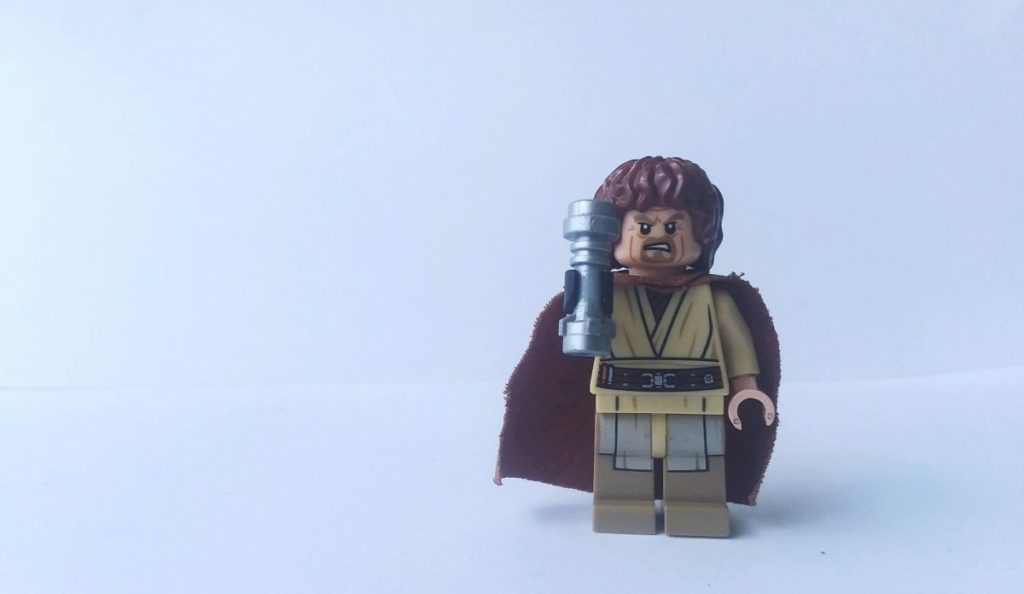 But Luke doesn’t always look the same. Towards the later part of the movie, he appears as a force ghost in front of Kylo Ren to help the Resistance escape. When he does this, he wears a much darker color. Also, his hair is shorter and darker. For the hair, I would use a common dark brown hair piece with a little curl at the front. And for the outfit, I’d choose his black Jedi Knight gear from Return of the Jedi for a quick trip down memory lane. Add a cloak and… voilà! 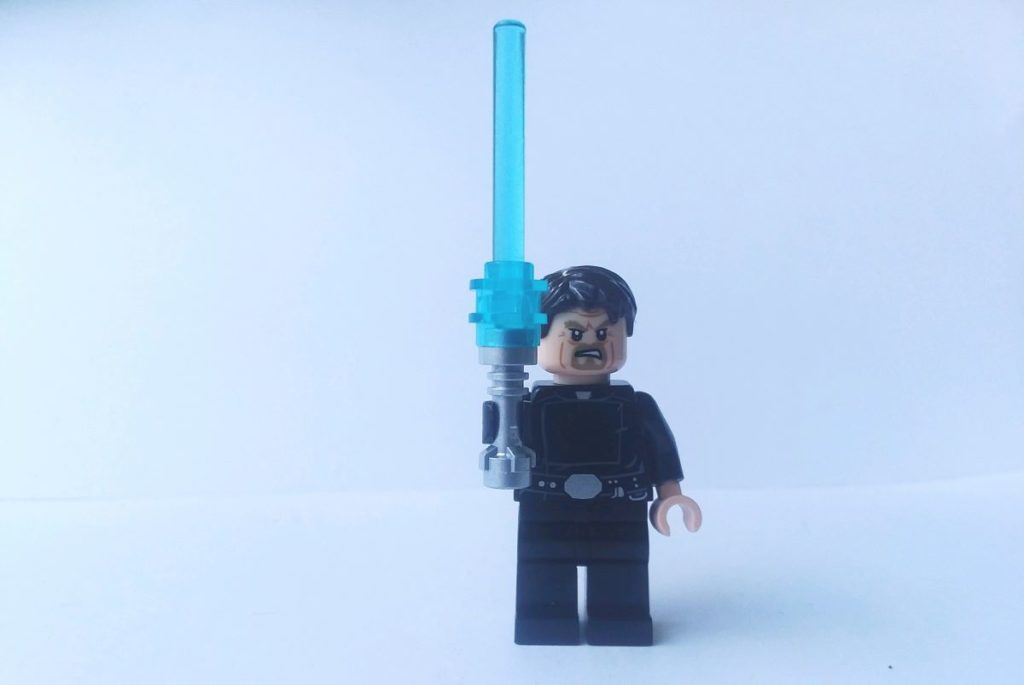 Now that you have Luke and Leia, you’ll need just one more important custom! How could you forget Rey, the main character! While she is a popular character, it still can be hard to find her in a set, so let’s make one without her regular pieces.

I’ll admit, her hair is very unique. It’s hard to find the similar three-bun style on any other figure. But later in the movie, she lets her hair down, which gives us something easier to work with. Try to find a dark brown hairstyle that goes down the back, maybe like Hermione Granger‘s hair from the 2012 era of Harry Potter LEGO.

Rey should look confident and ready to battle the First Order. A good option for this would be Sabine Wren‘s face, or maybe Captain Marvel‘s for a more determined-looking alternative.

Rey seems to have three distinct colors throughout the sequels. In The Force Awakens, she sticks to her brown scavenging garb. In The Rise of Skywalker, she mostly sports her white Jedi training outfit. But in The Last Jedi, she prefers grey, symbolizing the call of both the light and dark sides of the Force. That’s why I would use Gandalf’s grey tunic from The Lord of the Rings. It may not look perfect, but sometimes perfect is unachievable and you have to settle for just okay. 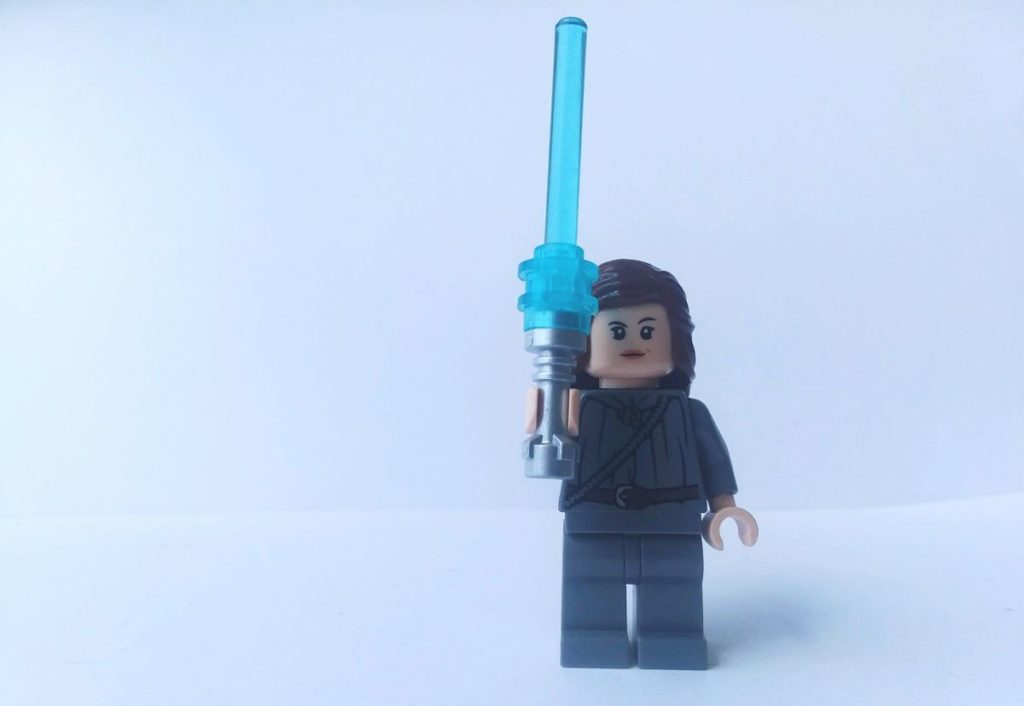 The take away? LEGO Star Wars custom minifigures are extremely creative, despite how challenging they can be. With the right tools, pieces, and perseverance, you can make any iconic character come to life, even if the character doesn’t have a LEGO form! Now go build some customs and show them off to the world. Happy building and may the Force be with you!

The Signature Figure: The greatest minifigure of all!