Do you love LEGO? Do you like to make your own designs by combining two elements together? If so, then what I am about to tell you could be of great interest to you, so listen very carefully, because I shall say this only once! If you haven’t heard already FireStar Toys is holding an event called #fstcreate. There are two options you can go down to enter the event, you can choose to take just one of them or both, the choice is totally up to you.

Make a mini set with using only 25 pieces of LEGO, with at least one of them being a product of FireStar Toys. Now I’m tempted to give this option a try at some point but not for now. For now, I am going to concentrate on the second option.

Make up a minifigure using at least one of FireStar Toys custom parts. After you have made your creation, take a photo and post it on Instagram using the hashtag #fstcreate.

I hear you ask, what happens after you have created your creation and posted it onto Instagram using #fstcreate? Well, then in the office they will collectively decide their favourites and republish your post on the FireStar Toys Instagram account. If that photo gets 1000 likes, they will automatically build, list and sell your creation. PLUS as a thank you to you for creating something, they will give you 1000 Star points (worth £50) to spend on their website! 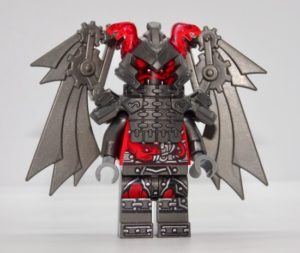 In this post, I am going to write and concentrate about Option 2 and hopefully give you an idea or a tip on going down the minifigure route. I feel this is the easier option for me to start off with, as it’s what I LOVE: Minifigures.

Now don’t get me wrong, I love LEGO in all its forms, I love nothing more than receiving and building a good LEGO set, but most of all I love minifigures. I love minifigures as much as I love my dog and cats – and that’s a lot, believe you me. But without minifigures, LEGO sets wouldn’t come to life. What good would a house or a car or a time machine be if we didn’t have the minifigure?? They bring life to LEGO or bring LEGO alive, however you want to look at it. They bring a smile to my face whenever I see one and each and every one of them are different. Just like life, I guess.

So where does one start, I hear you say? Let’s start with you! Your imagination. Let your creative juices start flowing. Start to think of the characters you like. This could be anyone from an actor or actress from a film or TV show you might like. Some of my favourite TV shows are Doctor Who, Game of Thrones, Star Trek, Star Wars, Gotham… the choice goes on. The amount of reality TV stars is growing day by day! Maybe you might choose to create one of those?

Or maybe it could be someone in the public eye that people would know or recognise. This could be a politician or someone from the royal family or president, or maybe a famous writer or well known poet.

Or maybe, you could create a totally new character which people can relate to or understand. FireStar Toys have already created some brilliant characters, like a steampunk time traveler, Mariachi Deadpool or a zombie surfer.

With hundreds of parts to use the possibilities are endless. Just let your imagination run wild.

One thing to bear in mind whilst thinking about and creating a minifigure character is that the minifigure has to end up looking like or resemble the person/character/figure it is meant to be. I had a few ideas of my own in my mind, now I just had to start to put them together. 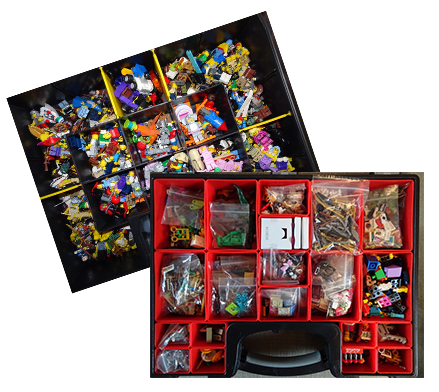 (Sorting through my minifigures and parts boxes)

Now that your creative juices are flowing and you have got a few ideas, it’s time to start choosing your parts. Let’s admit it, this is where the fun begins.

This is where it could start to get a little tricky if you let it, with so many parts and pieces to choose from. My main advise to you is to stay focused and keep the image in your head of what that person/character/figure looks like. Start to think about what that person wears or what makes them recognisable as that character. For example, we all know what Donald Trump’s hair looks like, don’t we!!!?

Well, that could be a starting point and the first part to find for that particular minifigure if you chose to make it. Maybe think about the distinctive features that will make the figure stand out. What they wear might make them recognisable or something they use regularly which will give us an idea of who they are. Anything that helps us to recognise who you are trying to create is going to help bring that character to life.

Another thing to remember and keep in mind whist creating your minifigure is, always remember that the end result has to include one piece/part designed by FireStar Toys used within your own design. Now it was time to go through my minifigures and parts to see what I could come up with and put together from the ideas I had come up with earlier.

Now I have to admit it wasn’t as easy as I first thought it was going to be. I knew some of the parts that I wanted to use, so it was just a case of finding those. Finding the parts that I didn’t have was the problem. Then the question came to me: Did I have the part printed by FireStar Toys that I needed? I have spent so long looking at all the awesome stuff on their website I think I might have blurred what I had to what I wished I had. 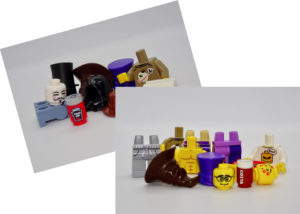 Putting your creation together

After searching and sifting through all your LEGO parts and minifigures, pull out all the parts you want to use and start with putting the pieces together to see what it looks like, see what works best and gives you the best result. You can make this part as easy as you want by just swapping a head to another body, as long as the end result makes sense, or a little more complicated by combining several different parts from different minifigures together to make an end result.

This will be the part that takes up the time while you sort and sift through all your stuff (or was that just me)? See what works best and gives you the best results.

Whilst going through all my stuff I realised that some parts I wanted, I didn’t actually have to complete the figure by using one of FireStar Toys custom parts to enter the event. Another tip for you, if you are not willing to buy what you need to complete a look for a figure, I suggest you first look at what custom parts you already own. Right, back to the subject at hand.

This should be the fun part for sure, getting to play and go through all your LEGO and minifigures, putting the pieces together and seeing if the ideas work, or maybe taking the time to take them apart again, as it didn’t look or work as well as you hoped it would. It might even give you that reason for a naughty little online shopping trip to buy the part you need and want. Below are some of the creations I have started to put together, some using custom parts and some I have put together but need some extra parts.

So what are you waiting for? What are you going to create? Have fun, be bold and be brave, but most of all be you. Show us what you can create with #FSTCREATE!