I, for one, love minifigures and I’m sure if you read this blog regularly so do you. I would even go as far to say that sometimes I love them more than LEGO sets, and they are often the main reason why I buy a set. What I love the most is creating LEGO minifigures using the spare parts I have. So you can imagine my excitement when a new CMF series is released. It’s a day I highly anticipate. I go to my local Waterstones, go to the till point and feast my eyes on a full box of minifigure packs. 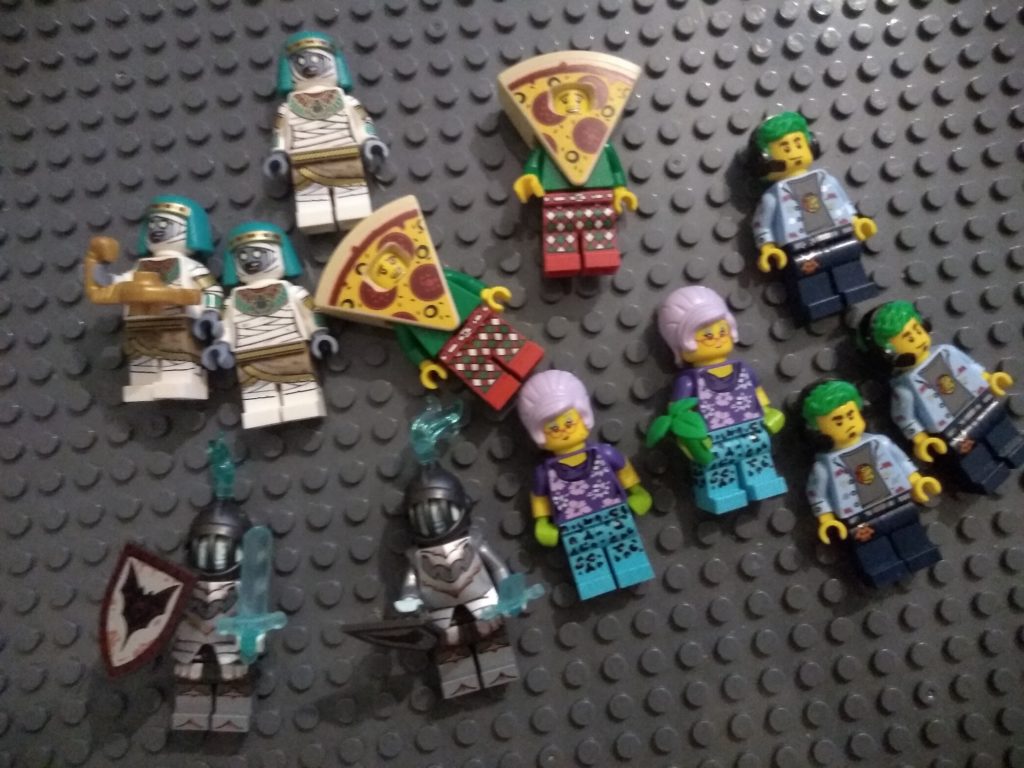 There are many amongst us LEGO collectors who have become experts in the field of feeling CMF bags for specific pieces to tell blindly what figures are inside. They spend a great deal of time at the store, feeling each bag carefully before selecting which ones to buy. I’ve even watched instructional videos on this very subject.

I don’t fall into that category, not usually. As you can probably tell from the title of this article, I love having spare pieces, and creating LEGO minifigures with them. The more reusable parts there are in a CMF series, the better. That’s why my favorite series so far is the recent Wizarding World CMF series, and the two LEGO Batman Movie CMF series. I’ve taken great joy in creating new Arkham Asylum minifigures using spare parts from a number of CMF series as well as some sets. The only limit to doing so, for me or anyone else, is our imagination.

If you follow my Instagram, you will see examples of me using spare pieces when creating LEGO minifigures. My casual Voldemort figure, for example, which uses Jay’s body from the LEGO Ninjago Movie CMF and Voldemort’s head from the Wizarding World CMF. 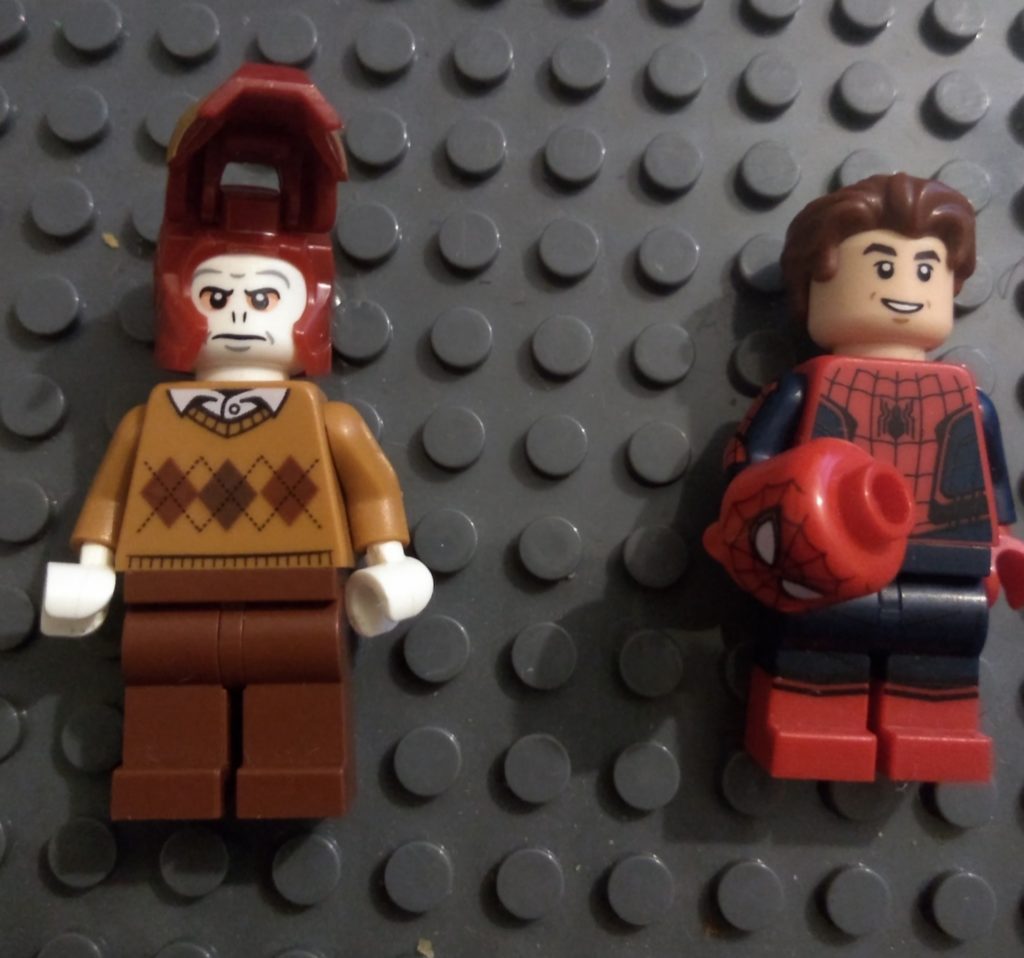 Due to my eagerness to get more of those sweet Arkham Asylum torso and legs, I’ve ended up with an unending supply of Joker faces. Apart from making an amusing picture to share on Instagram, what else could I do with all the Joker heads I didn’t need? Answer: I stick them on the spare clown minifigures I had from a CMF series!

Of course CMF series aren’t the only way of collecting spare parts for minifigures. If you buy the sets from the superhero themes, you’ll get multiples of the same figure, especially if you indulged in collecting most sets from the LEGO Batman Movie. Batman is included in most of these sets, and you may come up with the question “How do you use all of them?” Well, sometimes to use spare parts, you need to buy more parts. One idea I saw was someone got robot heads and used all of his Batman minifigures that way!

The reason behind creating LEGO minifigures

For my Instagram, I regularly create new figures using a combination of parts I already have and with parts bought from FireStar Toys. I like to tell short comic style stories on my Instagram and just seeing a piece either in my LEGO collection or on FireStar Toys can lead to the inspiration for a new character. Voldemort in particular has many variations mostly from parts I had going spare.

However, I have a whole drawer of minifigure parts that hardly ever get accessed, so I decided to set myself a challenge. The only rule was not to think too much about each figure and just let my imagination run wild. As you can see from this picture, I have made a few wacky combinations from a variety of different minifigure pieces. Highlights include Cyber Dobby, Iron Man Cedric and female Newt.

I will admit that as soon as the pictures are taken and sent to the wild world web, I take apart most of these creations. Although I do think Iron Cedric is definitely a keeper! I recently bought a few of the Iron Man Endgame polybags to create some unique Avengers and ended up with a lot of Iron Man helmets. I also collect CMF series, and after a few bags of Wizarding World CMFs, I ended up with a lot of Cedrics. 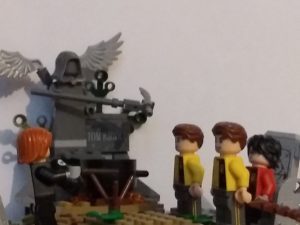 This can lead to some spare parts being deemed by myself as unusable. Then I see minifigures like Iron Maiden on FSTCREATE and think “That’s an awesome idea, how come I didn’t think of it?” As you can see from my little experiment, I, too, can come up with ideas like that! They may not be FSTCREATE worthy, but my mindset when it comes to minifigure pieces has definitely changed.

I recently purchased some make up organisers for my minifigure pieces and asserories. They fit nicely into my drawers and it was a nice cheap way of organising my pieces. The only downside was a bemused cashier who was wondering why a shaggy haired guy in his 20s was bulk buying make up organisers, but being an AFOL you get used to strange looks. What this does is it allows me to see what pieces I have at a quick glance and makes it so much easier when I am about to do a post on my Instagram or when I’m looking for a brick mobile phone or a hair piece. 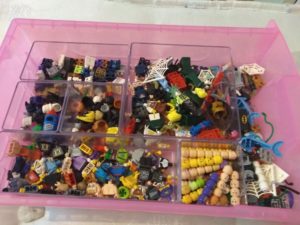 You don’t have to spend the money for special drawers or units for your LEGO pieces. There are alternatives you can explore to be organised and insure you get the most out of your spare minifigure pieces.

So my advice to anyone reading this would be to not limit your imagination. Use that spare Dobby headpiece, create that weird skeleton merman who’s just come back from his holidays at the Statue of Liberty. With LEGO, the possibilities are only limited by your imagination and if you don’t have the pieces available for what you want, sometimes using random pieces can create even better combinations! 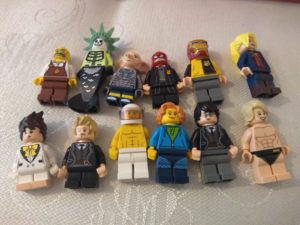 I would also advise to check your inventory before going out to buy spare pieces. I’ve often discovered I had the parts I needed all along but neglected to check. As your collection grows, so will your spares pile, but it doesn’t have to be that way. Create random, exciting minifigures. Send them to the guys at FireStar Toys and DM Brickbanana on Instagram and let me see your creations. Who knows, I may even use them in my weird and wonderful stories.

If you’ve read this to the end, thank you very much. I hope you have a wonderful day. Happy building!!