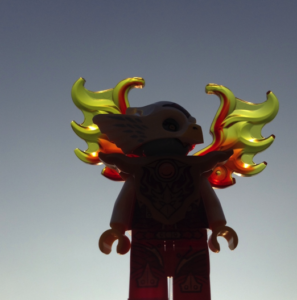 When you’ve been in the LEGO community for a long time, you tend to notice things. Some are easier, like where a certain collector/photographer is from, or whether they like sharing behind the scenes images or not, but this is not always the case. Some things start nibbling your brain, and as time passes by, you find proof of whether you were right or wrong. One of my biggest discoveries were about the Legends of Chima LEGO Minifigures. But before we get started on that, there’s another observation I’d like to share first.

When I first started an account on Instagram, I was amazed at the number of people interested in LEGO. Sure, I knew it was one of the most popular toys worldwide, but I would never imagined I’d find a place with so many adults, rather than children. For me, it was a gold mine. You see, I had to hide my interest in LEGO from almost everyone I’ve known my whole life, because it was childish to play with toys, a woman should be interested in more serious stuff, like finding a husband, or raising kids, or cooking, or… I’m sure you get the idea. Playing games, as long as it was for a short time, was acceptable, but playing with a toy… I mean, come on, there are more important stuff to do in life, right?

That’s why I was so happy to see many people saying “Wrong!!”

While I don’t know everyone’s personal story, I doubt they had it easy when it comes to LEGO. It is, after all, a toy, and global prejudice is kinda hard to ignore. However, either this way or that way, they were there, still collecting, still playing, still photographing, and they didn’t care much about what “regular” people thought about them.

As I got to know them, I realized there were 2 main categories of AFOLs (adult fan on LEGO): Collectors and photographers. The collectors focused more on, well, collecting, and the photographers focused more on – wait for it – photography. It was very easy to see this in their posts. One group didn’t care much about the composition, lighting and the story the image tells, and the other didn’t “have to” have every set/Minifigure ever made. The balance between the two wasn’t always 90/10, some even came close to 50/50, but it was there. You could see it after following a certain person for a while.

I would like to say I’m one of the 50/50s, but that wouldn’t be true. I’m more of a collector than a photographer, but I do try to keep the balance as close as possible.

Social media is for socializing, right? I mean, it would be kind of pointless if you just logged in, looked at the pictures, and logged out, without interacting in any way. So when you start interacting, you start learning things. Some general stuff, like there’s this site where you can buy LEGO in bulk, or that company that makes awesome custom items, and some personal stuff, like how a certain theme should have never been made, because “it sucks”. In other words, you start learning other people’s opinions. And when you have collected enough data, you can make your own conclusions.

Bear with me, I’m coming to the good stuff.

I realized that Legends of Chima figures were some of the least fortunate ones in the AFOL community. For some reason, many collectors disliked them. Now, at this point I can only speculate as to why. They have very specific features, an animal head on a regular Minifigure body. Sure, all their parts are interchangeable with other Minifigures, but it’s kinda hard to put a crocodile green body or a elephant gray legs on a yellow skinned person. They have their own background stories, and that makes it hard to create new stories for them. It’s like putting a Darth Maul Minifigure in LEGO City and saying it’s one of the good guys in a world where so many people know that he’s not. 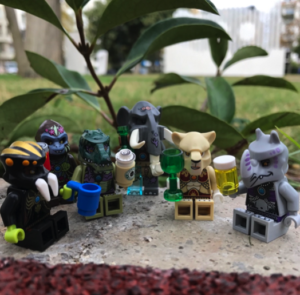 The unfortunate Chima figures had no place in the cities many collectors had.

Photographers, on the other hand, had a more positive approach toward them. I remember one of the best toy photographers I know saying Chima figures were among some of her favorites because of their colorfulness and variety. She then said since she didn’t know much about their stories, they were a blank slate to her, which made it easier to create her own stories for them. True, she was one of the few AFOLs that liked Legends of Chima and used them (a lot) as subjects of her photography, but the way she thinks affected me and made me question why I liked Chima.

When I first saw them, I thought they would be a great addition to my collection. I grew up watching Thundercats, and these weren’t so different from them – animal heads on a humanoid body. However, I realized I knew nothing of the story LEGO made for them. For me, that was important. Ever since I was a kid, I made my own stories for my Minifigures, but those were more generic. Besides, I was an adult now, and I collected more consciously. So I made it my job to learn their stories and purchase my Minifigures accordingly. Whether I decided to stick to those stories once I got them, was completely up to me. 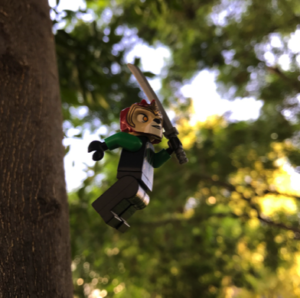 I went to the LEGO website and read the stories of each and every Legends of Chima character, which, turned out, was more that I would’ve thought. In their world, there were many different tribes; lions, eagles, crocodiles, vultures, gorillas… Just like in any world, some were good and some were evil. Same was true within the tribes as well, one child of the leader was good and the other wasn’t. One commander wanted peace while the other used every opportunity for war. One character was as clever as they come, the next, not so much. Before I knew it, I was in the Legends of Chima universe, wondering what was happening to who.

After that, it was easier to pick the ones I wanted to add to my collection. I may not have taken a lot of pictures of them since they have become a part of the family, but they were never outsiders in my eyes. Just like the Minotaur, the Yeti, the Cyclops, Sonic the hedgehog, Chewbacca and Yoda, they belonged.

I can almost hear some of you shout “How can you put Chima and Star Wars Minifigures in the same category?!” Well, answer me this. If the Star Wars films weren’t such a big hit for such a long time, if you have never known how important Yoda’s role was in the films, what would you think about buying a short Minifigure with a green wrinkly face and long pointy ears? For someone who has no idea who Yoda is – and believe me, there are more than you’d think – there isn’t much difference between him and Laval.

However, that is a subject all on its own.

For now, just consider this. If Legends of Chima has been around longer, if it was more popular, if there were novels and comics about it, if it was something your parents, or even your grandparents knew about… how would you treat it then?

Something to think about, wouldn’t you say?