If someone says “LEGO figure” the standard four brick tall minifigure springs to mind. As this figure’s design hasn’t changed since its original release in 1978, that’s not an unreasonable opinion. But there have been other LEGO figures and they’ve been bigger. In this article, we’re going to look at a few bigger LEGO figures. I’m going to focus on the figures that have stood taller than our standard little figures. 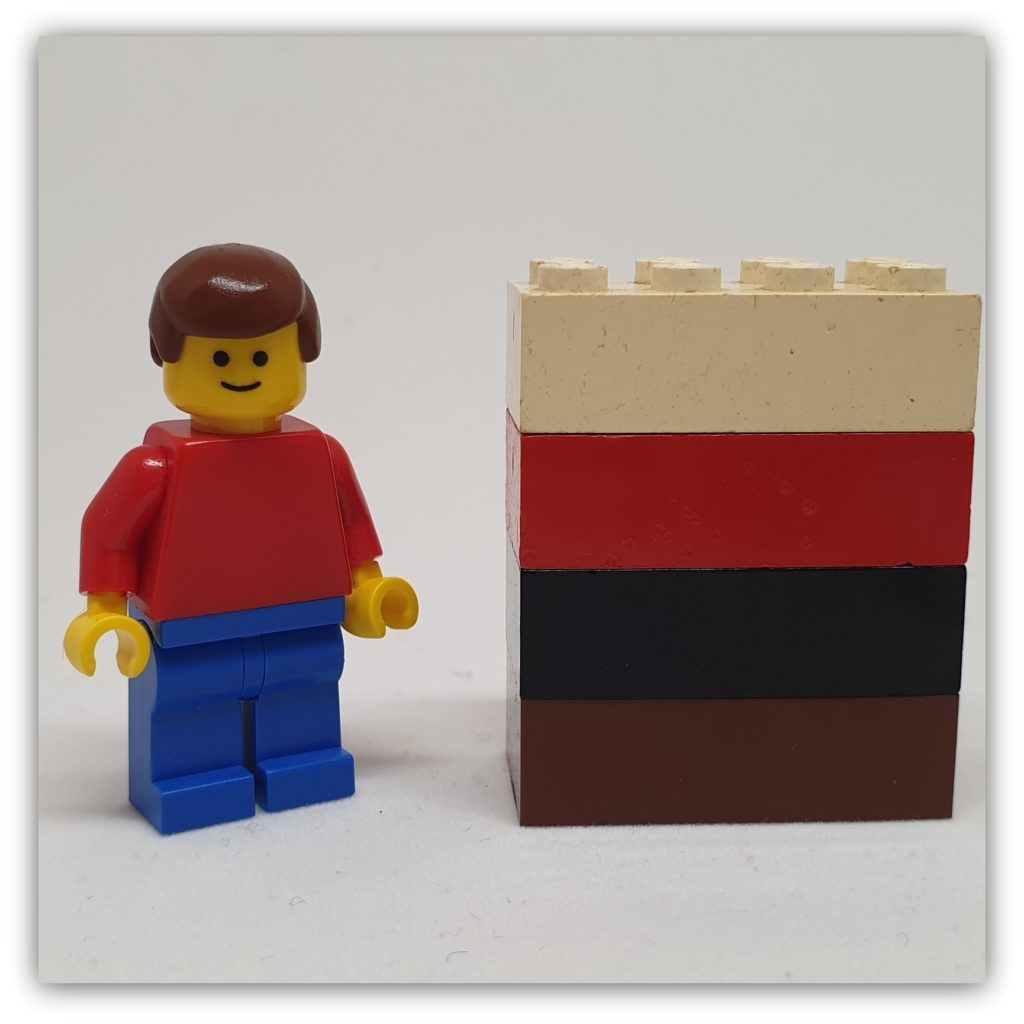 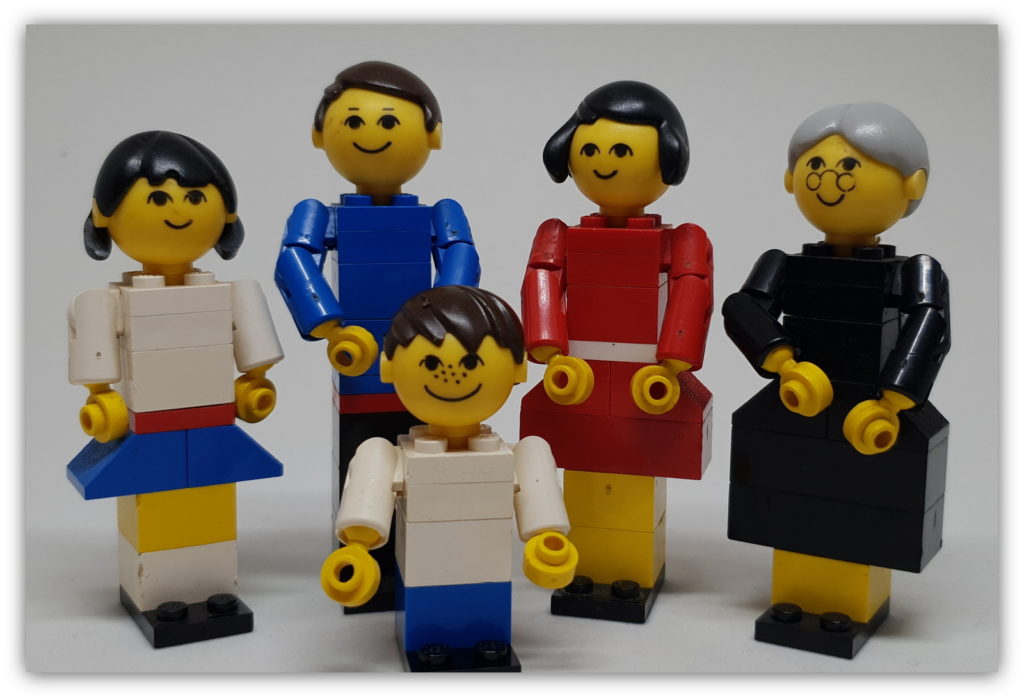 Before the minifigure was the maxifigure who ruled the LEGO toybox from 1974 through to 1978. Sold as LEGO People or the LEGO Family; they were part figure and part brick construction and stood about eight bricks tall. The hair was a clever construction with the male and female wigs able to be worn either way round; this provided some variation to the figures. Because they were so much bigger the various accessories, such as cupboards, would also have to be sized up too. The image below from set 268 “The Family Room” (1979) shows the scale between the maxifigure and the minifigure. What is also interesting was that at this time, there were no doors or windows to buildings! 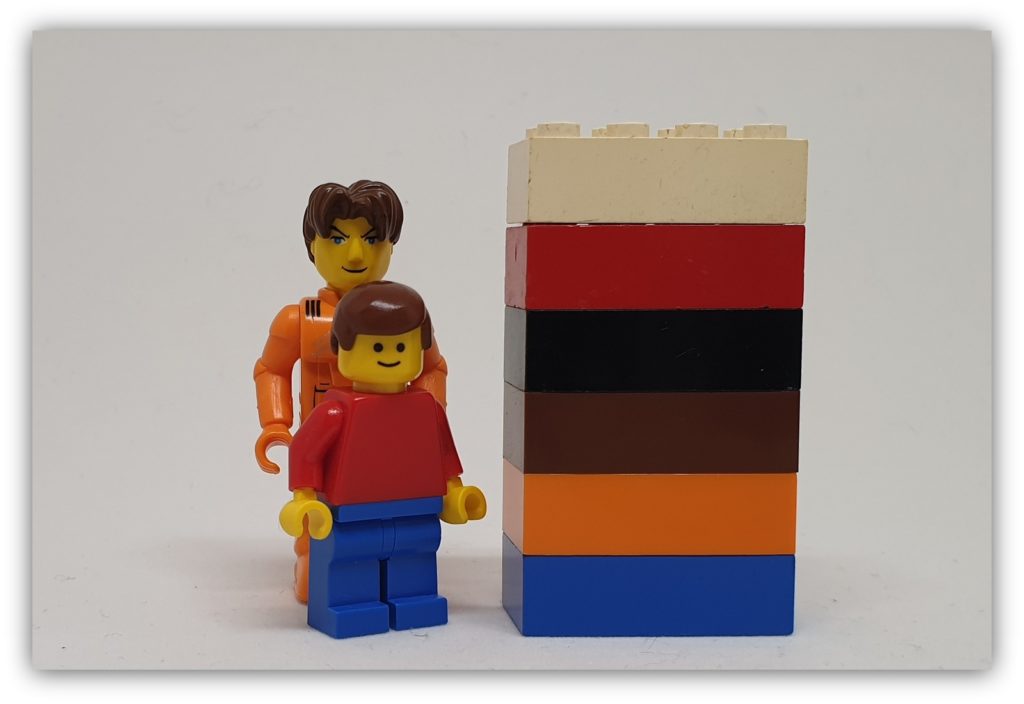 In 2001, LEGO released a new theme – Jack Stone. There were 25 sets in the theme running over two years. As you can see, Jack stood a brick and a half taller than a standard figure. The downside to this taller figure is that it isn’t as compatible to fit in standard builds such as cars.

Whilst the theme stopped in 2003, in 2004 the series “4 Juniors” was released which featured pirates with the same measurements as Jack.

The Fabuland series ran from 1979 to 1988; a series of figures designed for the younger age group. Standing about a brick taller than a standard figure, these animal-people were available with cars, motorbikes and houses; all in a very bright colour scheme which would appeal to smaller children. Unlike our standard figure (but very much like Jack Stone) you couldn’t swap parts as you wanted to; also whilst you couldn’t twist the hands at the wrist, the head could move on a ball joint providing more interesting movement in the figure.

Since 2002 LEGO released a bigger minifigure than standard. I’ve seen them in eBay listed as Bigfigs (but see later in this article) and Brickset call them “Big Figures”. Typically, these have been for giant figures such as trolls, Thanos or the Hulk. They feature very little movement except in the arms and wrists; also the hands don’t grip or click like the standard claw hands of a minifigure. 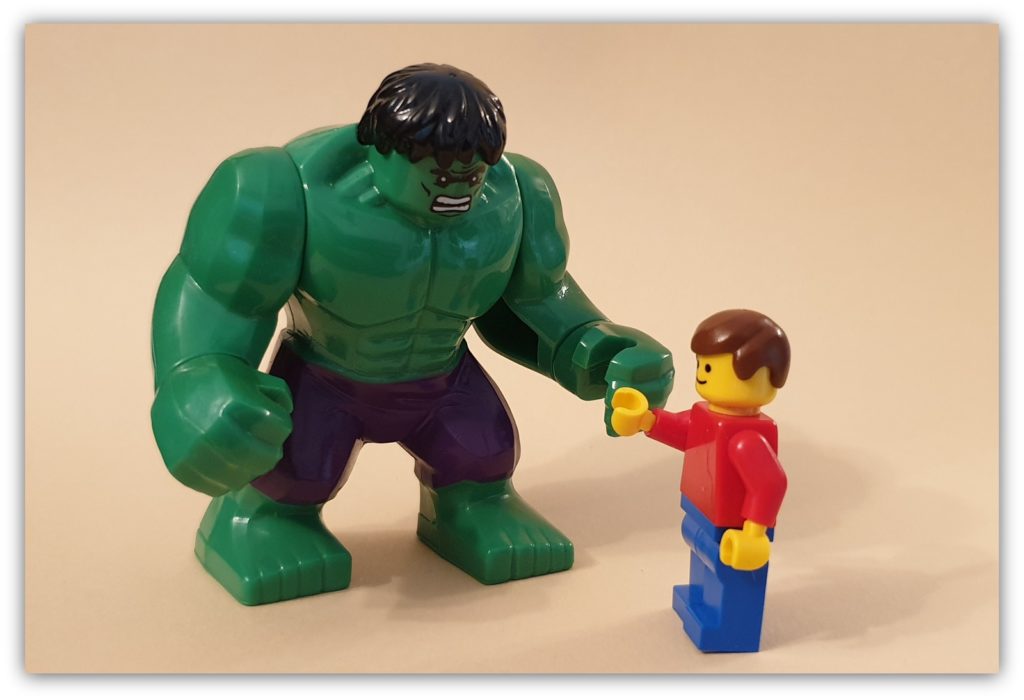 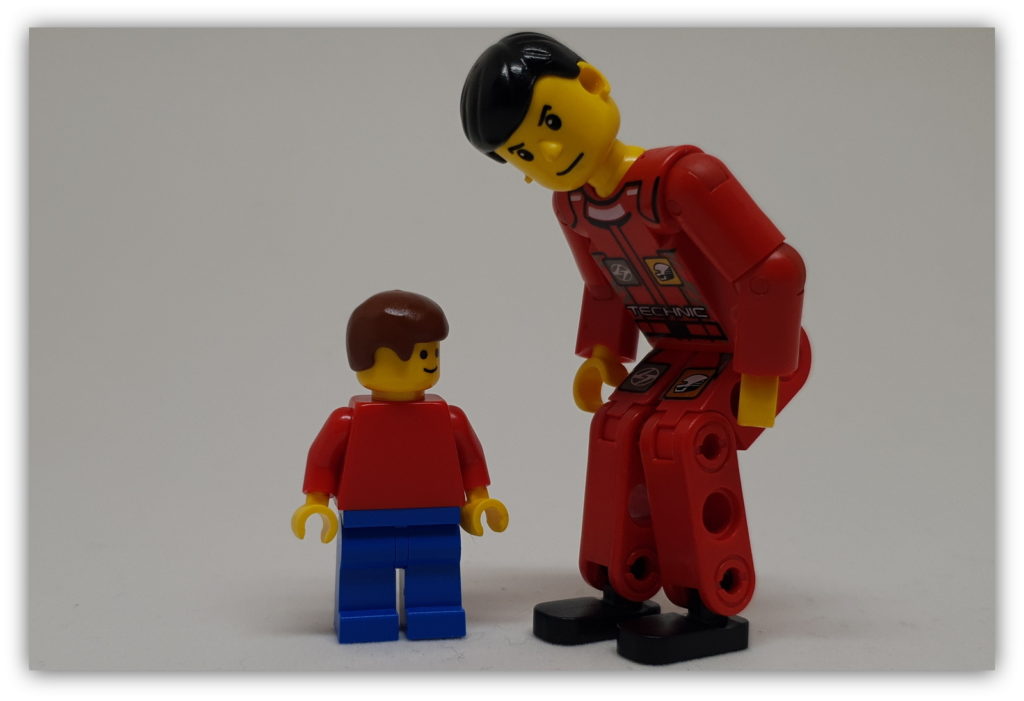 Technic figures arrived on the scene in the 1980s and last appeared in 2001. Standing approximately 9 bricks tall, these figures fitted into the Technic sets perfectly. There was very little scope for swapping parts but what these figures did have were multiple points of articulation; these figures could be posed into realistic positions using the ball and hinge joints. They also featured claw hands, but these were wider to be able to hold the axle bars. 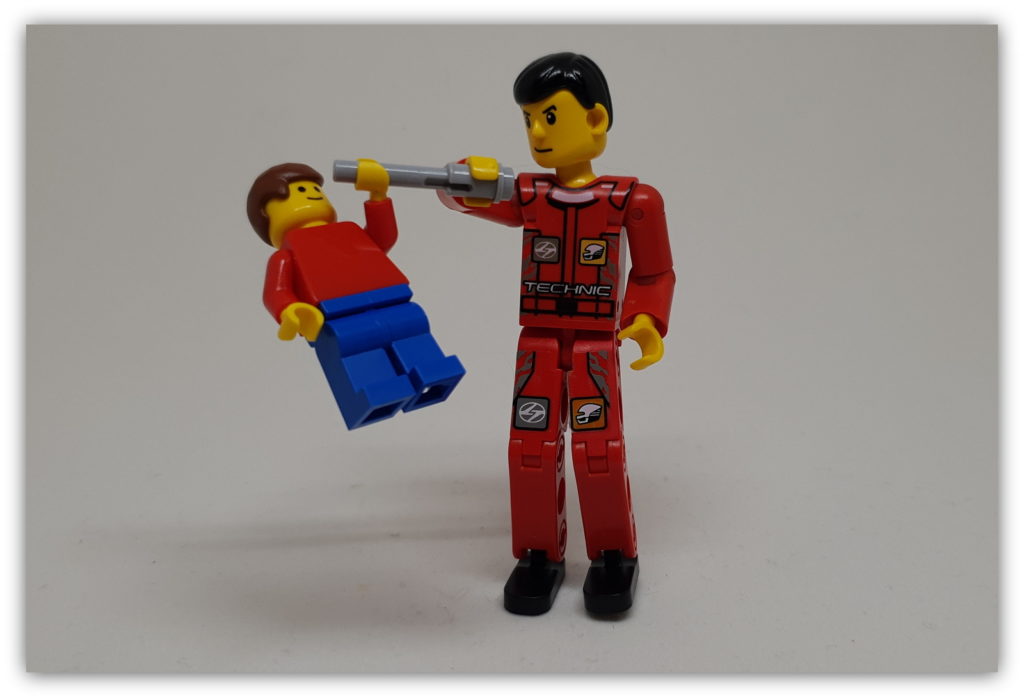 An example Technic set with figure was 8230 “Coastal Cop Buddy”

Before Friends appeared in 2012 to take on the LEGO City theme with interesting colours , LEGO had already attempted to break into this gender-focused market with Belville. This theme ran from 1994 to 2009. Belville dolls stood a little taller than the Technic figures and as you can see from the witch doll the moulded head was much more humanised. 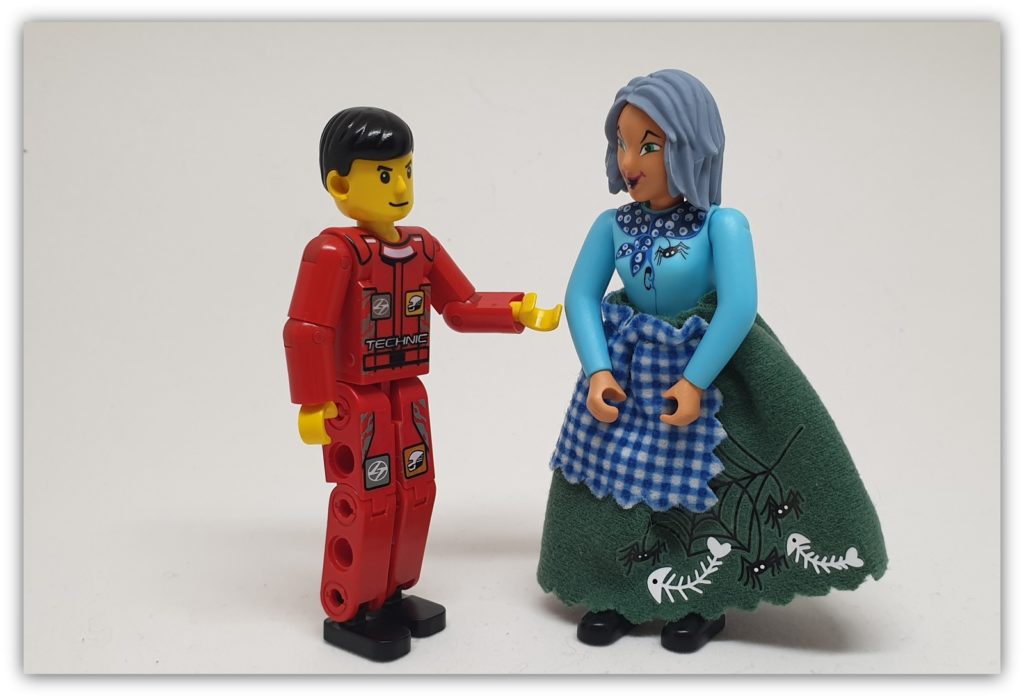 The Belville theme wasn’t the only one to feature doll figures. LEGO also had a theme called Scala; whilst the original launch in 1979 focused on enabling girls to make creative bracelets and pendants; in 1998 it released a doll-focused playset, complete with clothing accessories. The Scala figures also featured elbow joints which were missing on the Bellville dolls; however, they didn’t have knee joints, something that seems to be a common thread with LEGO figures!

With perhaps the technical exemption of the LEGO Family all the figures we’ve looked at so far have been obvious figures with parts which are exclusively for making a recognisable figure. I say technical exemption as the body and feet for the LEGO Family people are standard bricks, but the arms, head and hair can only really be used for creating a play figure. This section (and the next two) also look at LEGO figures that stand taller than a standard minifigure, but really blur the lines between building and figures. 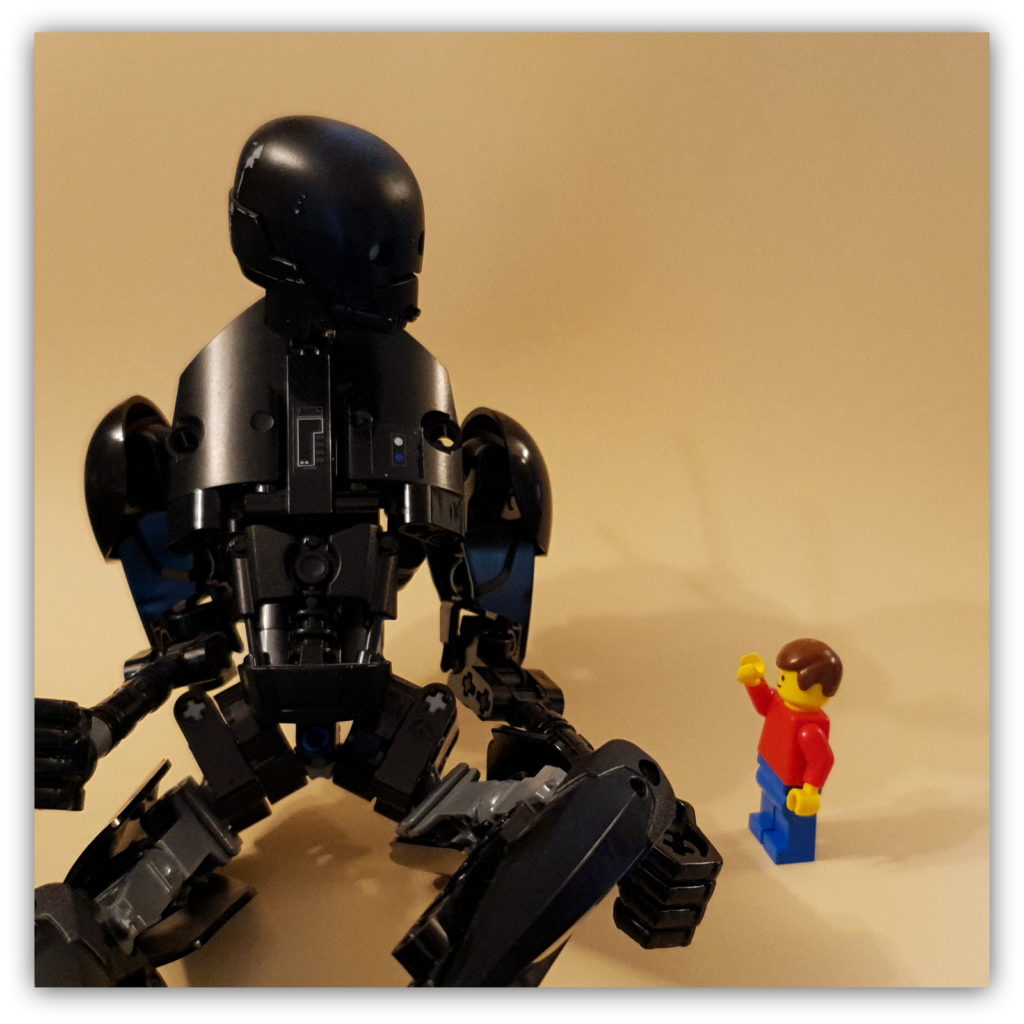 The first of these figures are Constraction figures. This term comes from “Constructible Action” figures. These sets have also been termed Ultrabuilds.

Originally launched in 1999, its first proper theme (in my opinion) was in 2001 with the BIONICLE series. Bionicle comes from Biological and Chronicle and the broad theme was the mythical island of Mata Nui, split into several areas. Each of the Bionicle inhabitants had different masks to depict their area. The theme ran from 2001 until 2010. There was a reboot in 2015 but this stopped a year later.

These sets mainly used Technic elements to build the figure with one or two specialised parts. To date there have been a number of themes using these constraction figures, with Star Wars and Superheroes featuring more well-known figures such as Darth Vader, Batman or the K-2SO shown above (set number 75120). 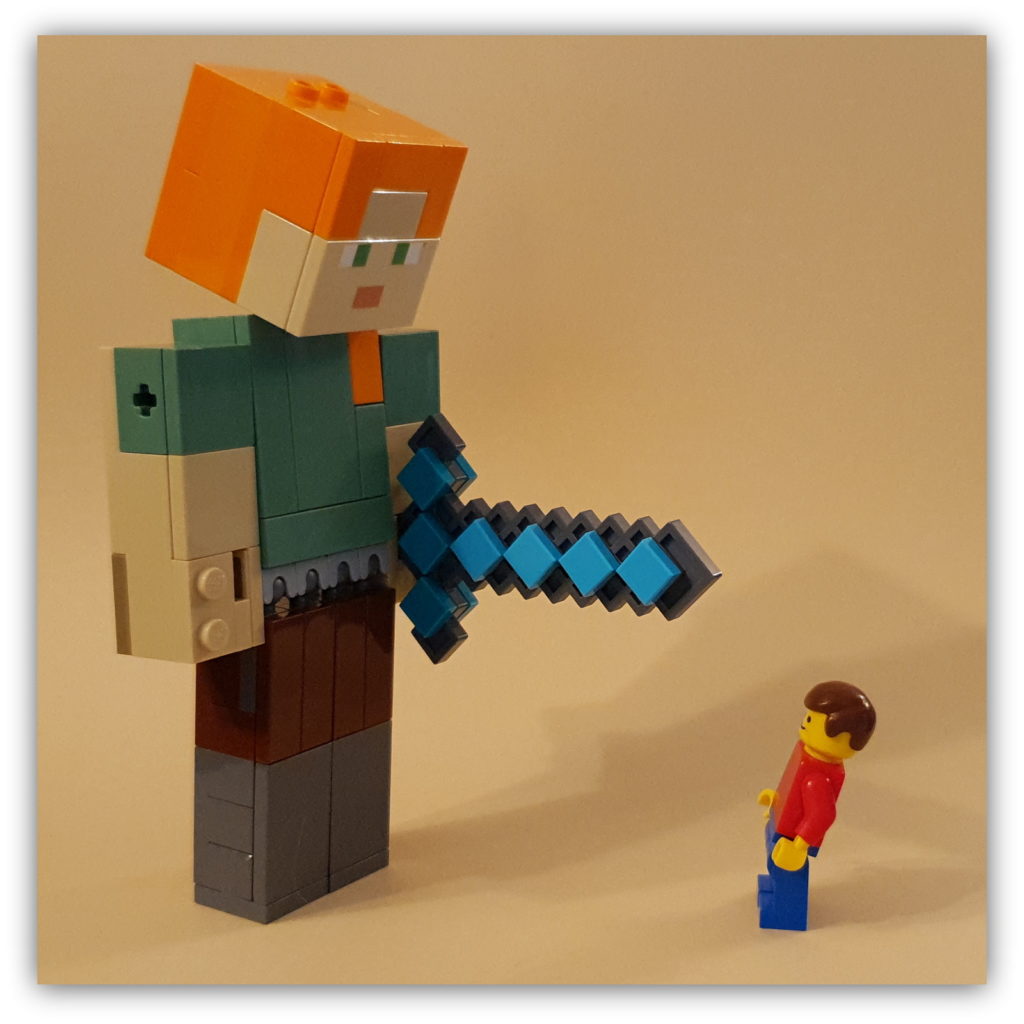 One of the criticisms levelled against the Constraction/Ultrabuilds was that they just didn’t look like figures but more robot-like (which was why I thought the K-2SO was such a good build). In 2013 LEGO launched a new theme which for many was a “why hadn’t they done that already” moment; this was the release of Minecraft sets. In 2019 LEGO released three brick-built figures (Steve, Alex and a Skeleton, set numbers 21148 to 21150); previous figures in the theme were either standard size or smaller. These “Big Figs” do have some movement to them and use standard LEGO parts to build.

Unless you’ve really ignored the toy aisle in just about every supermarket, let alone toyshops, then you will have no doubt seen the Funko Pop! Collectible figures. There seems to be hundreds of variant models out there now, covering just about everything that can be themed or licensed. In 2016 LEGO launched its own theme to go against that; this theme was the Brickheadz. 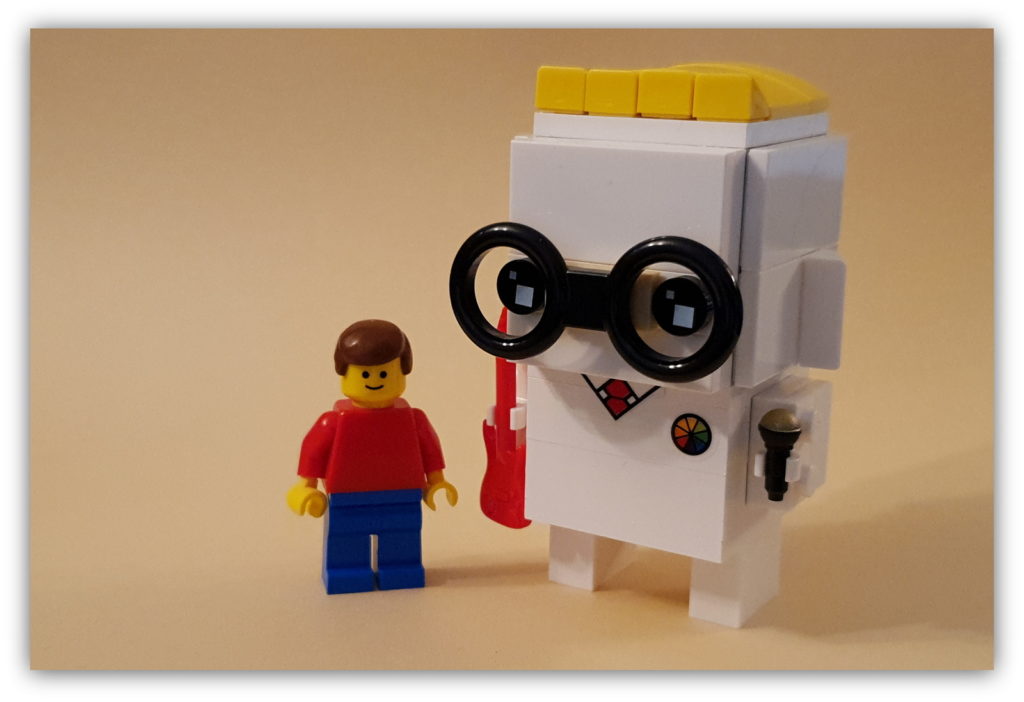 These brick constructions were designed to be displayed, rather than as toys to be played with. According to Brickset.com since its launch there have been over 80 Brickheadz official sets (including promotional releases). Set number 41595, “Go Brick Me” was possibly the most fun, providing enough parts for the builder to make three figures. Importantly though it also provided the necessary bricks to enable the SNOT (Studs Not On Top) building to put the flat plates on the sides.

When LEGO opened their flagship store in London, they released a new figure called Lester, complete with a Union Jack waistcoat. Brick Sanity customs created their own custom figure; they also released a custom Brickheadz version, which I bought.

The theme also inspired me to have a go at creating my own version of a Jason Freeny Brickheadz too. 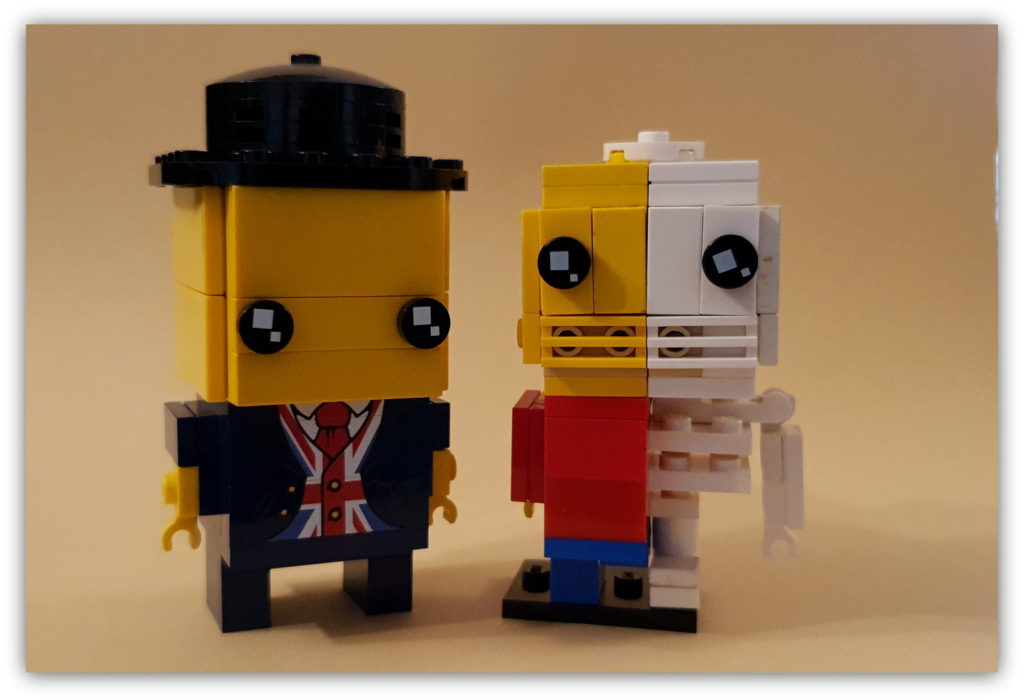 Unfortunately, it would seem that the rumours are about that this theme may be coming to an end at the end of the year; which is a shame but one that I can understand. LEGO bricks and figures are meant to be played with, not just stuck on the shelf. While these figures do hold their own against Funko (in my opinion), their continuous wave of releases is far faster than LEGO.

But is bigger better? 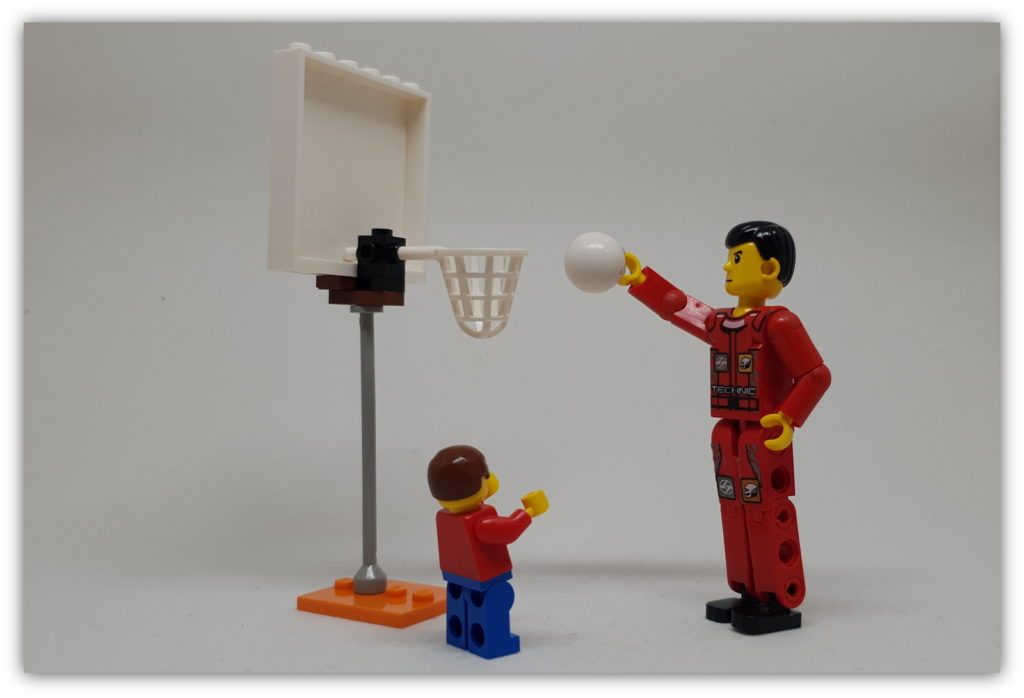 In this article, I’ve looked at LEGO figures that have been larger than a standard minifigure. I avoided including the Star Wars drones, Jabba the Hut or any of the Duplo figures as well as some of the creations that have come from the second LEGO movie.

The primary purpose of the minifigure is to bring life to our LEGO creations; it enables us to represent ourselves in a figure 4.5cm tall. In some cases, such as the Technic figures, we can then bring our bigger models to life; also, the larger figures are going to be easier to photograph in non-LEGO settings, but of course, scale will play its part.

So, is bigger actually better? I’m not sure it is. The minifigure is now the standard for all LEGO figures and doors, windows, cars and accessories are all scaled to the four-brick figure; whilst it’s clear attempts have been made, it would seem that these don’t inspire the buying public in the same way.

Don’t forget to check out this article about smaller figures and this one about the variety of big figures LEGO has released. 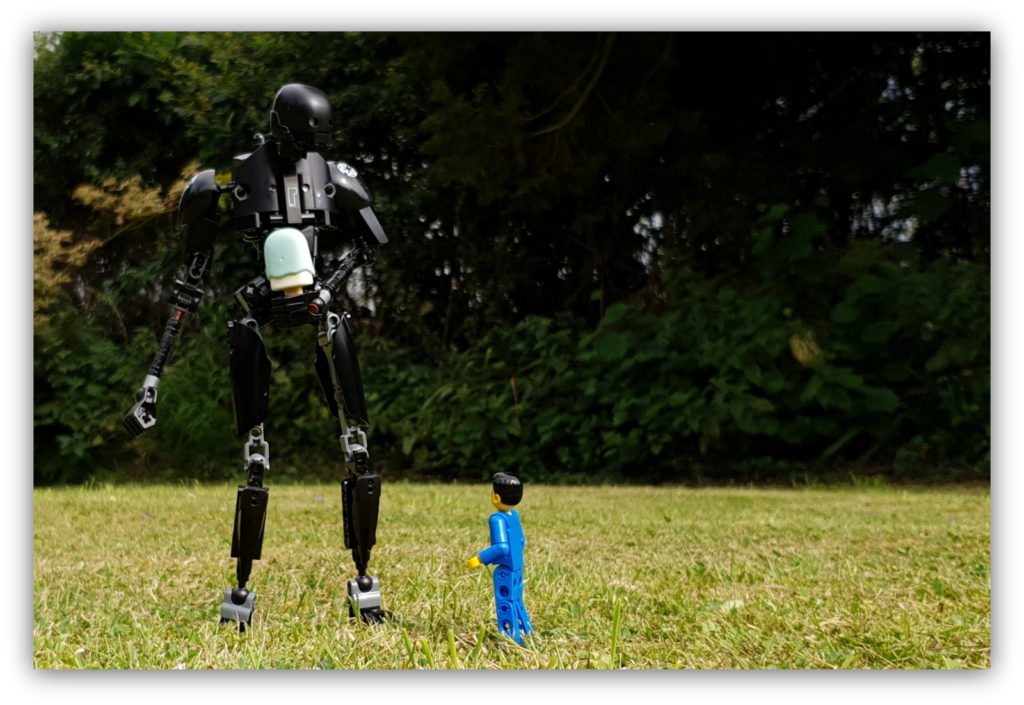