Every time a friend visits my house, they are shocked by the number of minifigures I have. Don’t get me wrong, I’m not boasting or anything. In fact, I’m pretty sure my collection would be considered small when compared to other AFOLs. My friends are mostly non-LEGO people, who have only seen two or three minifigures that came with the sets they bought for their children – if at all. So 900 minifigures in the same place may seem a bit… overwhelming. Some of them ask me how long it took me to collect them all, some tell me I’d be rich if I were to sell them. Which brings me to our subject today: Are LEGO minifigures worth collecting?

Like with everything, the answer would change according to your point of view. Personally, I think even the question has the potential to change. If someone were to ask me this question, I’d simply say “Worth what?”. Money? Sure, if you have a super-rare minifigure you got from SDCC, you can sell it for a good amount of money. Or if you have never opened a set you bought 30 years ago, I’m sure you can find a collector ready to get it off your hands. There are those who collect the rarest of the rarest minifigures, some of which I have never heard of. Some buy sets in bulk to sell them after a few years when they’re retired. So yeah, if you have the mind and the opportunity, you can turn LEGO into an investment.

There’s another answer to my “worth what” question, though. Happiness. How do you feel when you see a new minifigure? It can be a regular City or collectible minifigure, a licensed one, or even a custom one. It can be one you’ve been wanting to get for a long time, or one you see for the first time. When you see a minifigure, any minifigure, do you go “Ooh, I’m going to get several of these, and sell them later for insane prices!”, or “Wow! That minifigure would look awesome in my city/collection/photographs!”?

Whichever’s your answer, I’m not judging. A few days ago, a fellow blogger shared a picture of this year’s SDCC Zebra Batman pre-sale page. We all know there are those who are in it just for the money. That’s their call, and personally, I think it’s their loss.

What is a minifigure worth?

For me, collecting LEGO minifigures is worth more than anyone can pay me. Yes, I have a lot of them. I have been collecting for more than 25 years, so the number tends to grow. But the thing is, each and every one of them have their own personality, their own story. Pick any one of them, and I can tell you when and where it was bought, and under what circumstances. Which ones were played with, which ones were loved more. There’s a small army in my house and I know all of them by heart. I still write stories for them, some you may have seen published here, others just for my own entertainment.

There’s nothing that gives me more joy than playing with them. When I sit in my living room and look through my collection, I feel happy. I feel I’m the richest person on the planet, because I have such an amazing collection. Do I have every figure I want? Of course not. And honestly, I don’t think I ever will. But what I have is enough to make me happy.

Why not just sell them?

You can argue that collecting LEGO minifigures isn’t worth anything – not unless you sell them, of course. They are just standing there, not doing anything, and that I would be able to do what I want or go where I want if I sell them. I mean, I should live in the moment, right? What good is having a collection if I’m struggling to get a job? And after I die, they would probably end up in the hands of someone who wouldn’t even know let alone appreciate their value, so I may as well sell them and get it over with while I have the chance!

You would be half right. Maybe if I sell my collection, I would be able to, I don’t know, travel the world, open my own business, or maybe even get a house so I wouldn’t have to pay rent. But you’d be wrong about the minifigures not doing anything. They actually do something that is quite hard to do. They generate happiness. And they do it without even lifting their tiny little arms!

Tell me, in a time where many young people fall victim to depression, when so many able-bodied people struggle to find work because of the economy, wouldn’t you give anything to be able to smile? To feel happy? And if one single minifigure can make you do just that, wouldn’t you hold on to it with everything you have?

Are LEGO minifigures worth collecting? My answer would be yes, on both counts. If you’re able to form a special connection with them, as I’m sure many collectors do, they are definitely worth collecting. If you’re only in it for the money, go invest away. There are many official and custom rare minifigures that you can buy for a relatively small amount of money, and sell for loads of it.

But that doesn’t make you anything other than a merchant.

For me, there’s a very distinct – and important – difference. In one situation, you live. You get emotional, happy to get a minifigure, sad to miss one. In the other… you just watch as life passes you by, unable to look at anything without seeing them as potential investments.

I choose to live. And would do it over and over again even if I didn’t have a place to live, or food to eat.

What would you choose?

Let me lighten up the mood with a small story.

In the image below, you can see my oldest and newest minifigures. The one on the left is from my childhood, I don’t even remember which set it came in. What I do remember is I played with it so much, that after a while its face print faded away. I felt awful. My favorite (and probably only, at the time) minifigure didn’t have a face anymore. In order to make me feel better, my mom took a marker pen and drew him a face. As you can see, she drew the eyes a little too high up. So now whenever I wanted to put a cap or a hair piece on, his eyes would be covered. So she found some weird part from a kitchen utensil, and made a hat for him.

He is called the LEGO-Ancestor (loosely translated).

The one on the right needs no explanation. But it’s the most expensive minifigure I own.

Which one do you think is worth more? 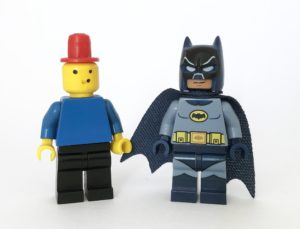