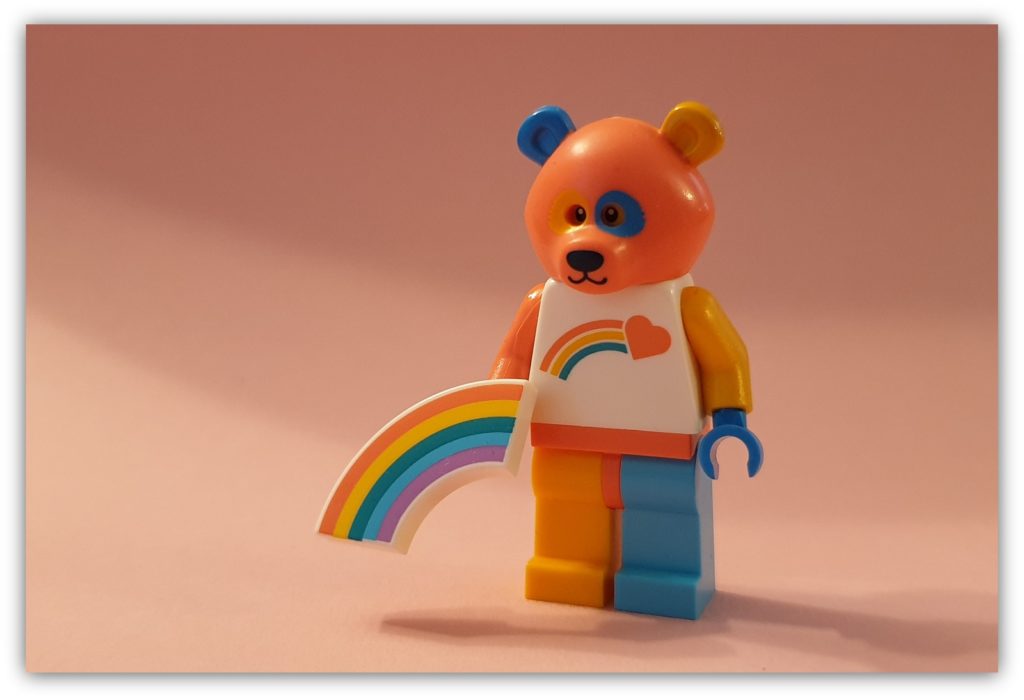 In my opinion, the Series 19 Collectible Minifigures may be one of the most exciting collection to date. As well as a bicycle as an accessory, we have flamingos, dog poop, chameleons; we have hearts and rainbows too. It was “Costume Bear Guy” that prompted this article. In my mind this little minifigure was a very subtle nod to the 50th Anniversary of the Stonewall riots; the beginning of what became the Pride marches around the world. Of course, it may also be that the Costume Bear Guy was nothing more than a version of the Care Bears franchise. Still, it made me think about inclusivity and diversity in LEGO; not just in the minifigure but also in the wider world community.

Many scholarly articles have been written on the importance of play in child development; one of the main reasons cited is that it allows the child to understand and interact with the world around them. Therefore, if the child can “see” themselves in their chosen toy, they can better engage. What better than a toy that will allow the child to create the world they want to try to fit into? And yes, this may be one of the very few times that I will concede that the primary target audience for LEGO is children.

The world in Yellow 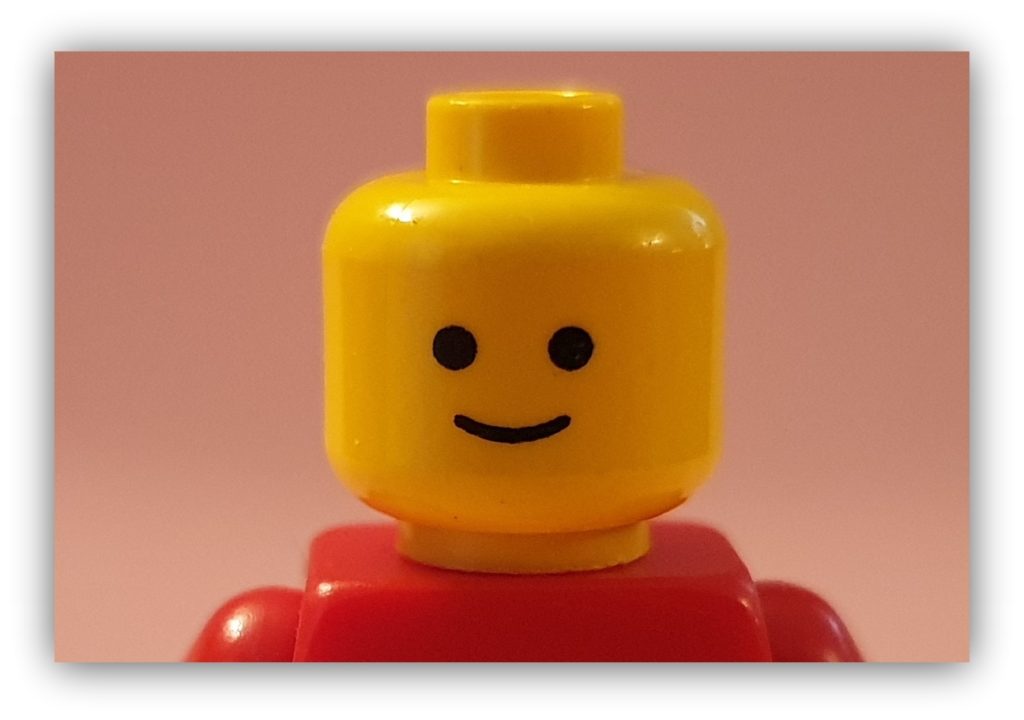 For over forty years, LEGO “people” have had a bright yellow skin tone. That’s not by accident either. Nobody in real life has bright yellow skin, so the minifigures don’t represent a specific race or ethnic background. The figure then represents all of us! Additionally, the original intention was that the faces would be happy and neutral.

Whilst non-human and monster figures could be presented in non-yellow, it was the LEGO Basketball series in 2003 where figures started appearing with authentic skin colours. In 2004, LEGO decided that the figures in these sets should better match the characters themselves. Lando Calrissian was one of the first to appear in the correct skin tone in the Star Wars set 10123 “Cloud City” (Han and Leia still had yellow faces). 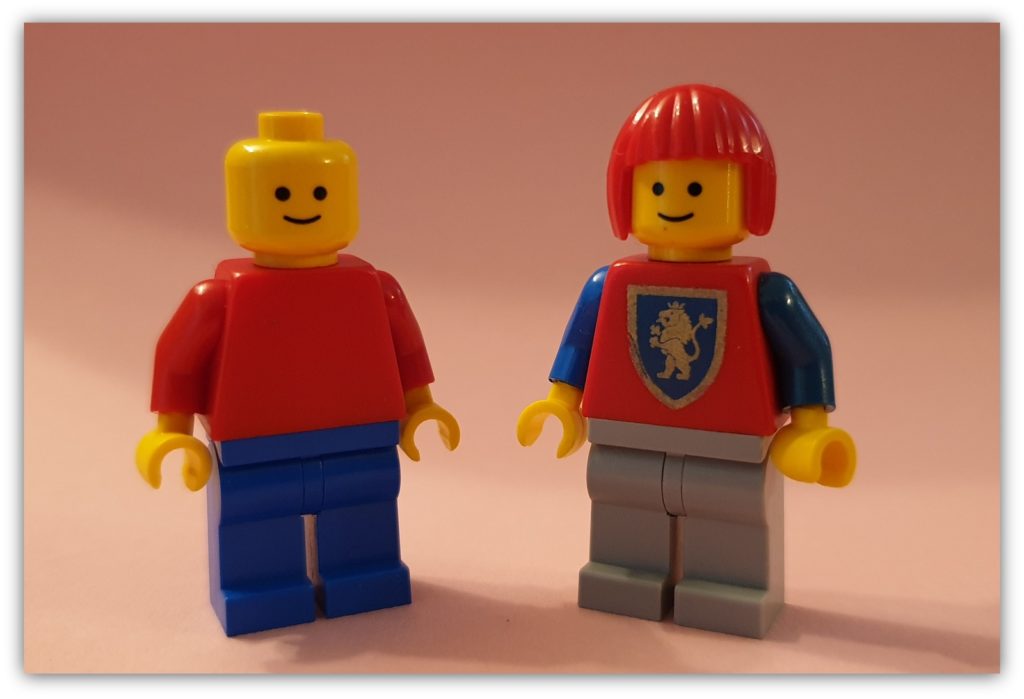 According to LEGO’s company profile, the original intention of the minifigure would be to “have no sex, race or role; these would be determined by the child’s imagination or play”. However, for as long as I’ve been playing with LEGO (which pre-dates the minifigure!) I don’t recall LEGO figures ever being “non-sexed”, pig tails have been there since the start.

The gender-neutral balance for LEGO has always been a little strained. The City theme had (in my mind) always been neutral; the LEGO policy of no greens, browns or guns meant that growing up my tanks, soldiers, cowboys and Indians would have primary colour schemes. In my little brick-built world, I was aware of Technic when it came out… but the themes of Scala and Belville just didn’t interest me; as we have seen in other articles, the scale of these figures wasn’t in keeping with the standard minifigure scale. But then, in 2012 LEGO gave the gender balance a huge shove when it brought in the Friends theme. According to LEGO, in 2011 boys comprised 90% of LEGO’s customers; so I can understand why this marketing line was so important.

What also came with Friends was a whole new colour palette as Heartlake City established itself. From a neutral-ish perspective I was a little upset with the new focus. My perception was that the City theme was gender-neutral. Yet with the new buildings and accessories that were coming, the City theme had started to become a bit of a ghost town. It seemed that it was reliant on just the mining industry to occupy the inhabitants (which was probably why they had such well-established police stations and hospitals). I had hoped that with the new sets City would also receive an injection of enthusiasm. I suppose if you include the Modular building sets, it has “sort of”, but these aren’t exactly cheap. 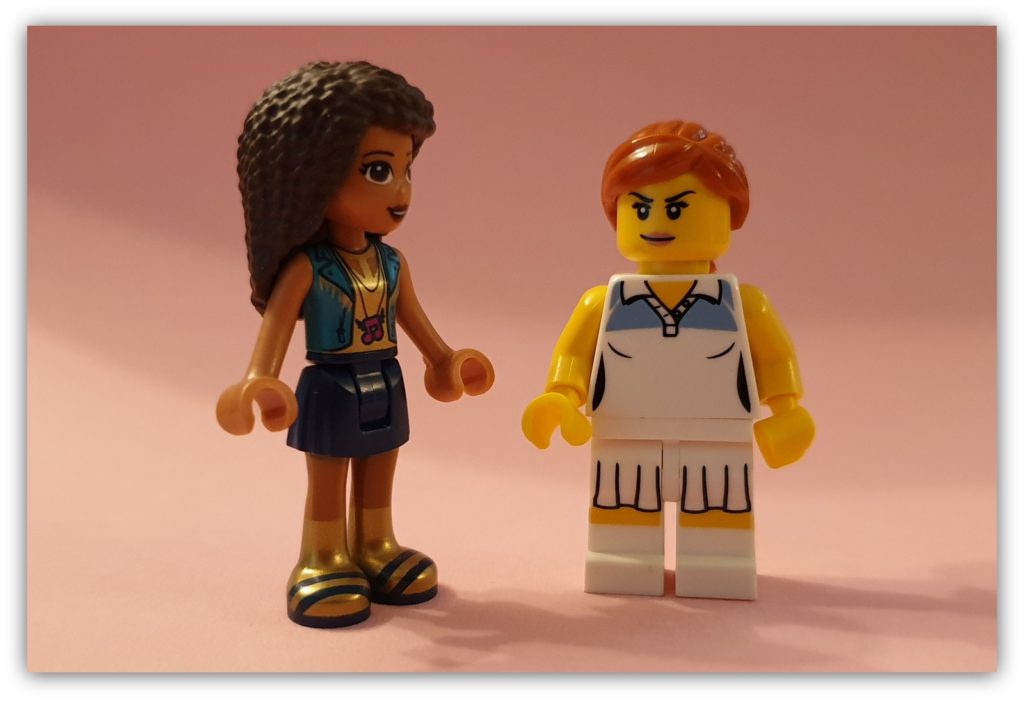 The shape of the standard LEGO figure is an interesting one. Whilst in proportion when compared against a Friends figure it is carrying a little extra; even if the male figure torso does have a six-pack.

Given that in real life we are all different heights and sizes then the “everyman” shape of the LEGO figure does provide a gender and shape-neutral figure. But that’s only if we look at the actual shape of the figure. If we look to the printing, then this tells a different story. It took me a while to see the printed waist and even now I think I see it as an afterthought.

The company Arealight has tackled this by providing a more feminine body shape for the minifigures. In comparison, whilst the Friends figures provide a more humanoid shape, they still have their drawbacks in my opinion. All the mini dolls have slender arms, legs and are quite slim; they have yet to produce a “fuller” figure. Whilst there is a precedent that this is never well received (there was a lot of comments when Mattel released new body shapes for Barbie (see this article from Time magazine – I think this would make the Friends theme far more encompassing. 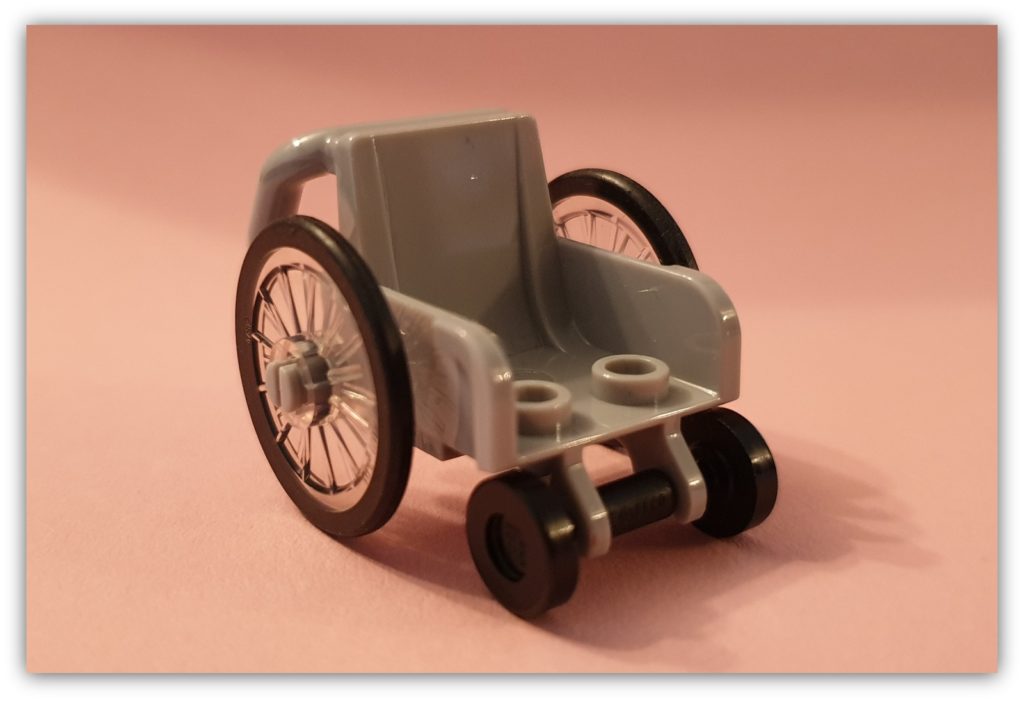 Another aspect of physical shape is dealing with disabilities. In 2016 LEGO released a wheelchair in its Fun in the Park set. This was the first time LEGO had released this in a non-medical setting; so effectively they released the first disabled person in a LEGO set. Also, apart from a few themes such as Pirates, LEGO hasn’t looked to include any prosthetics (e.g. the pirates peg leg or eye patch). 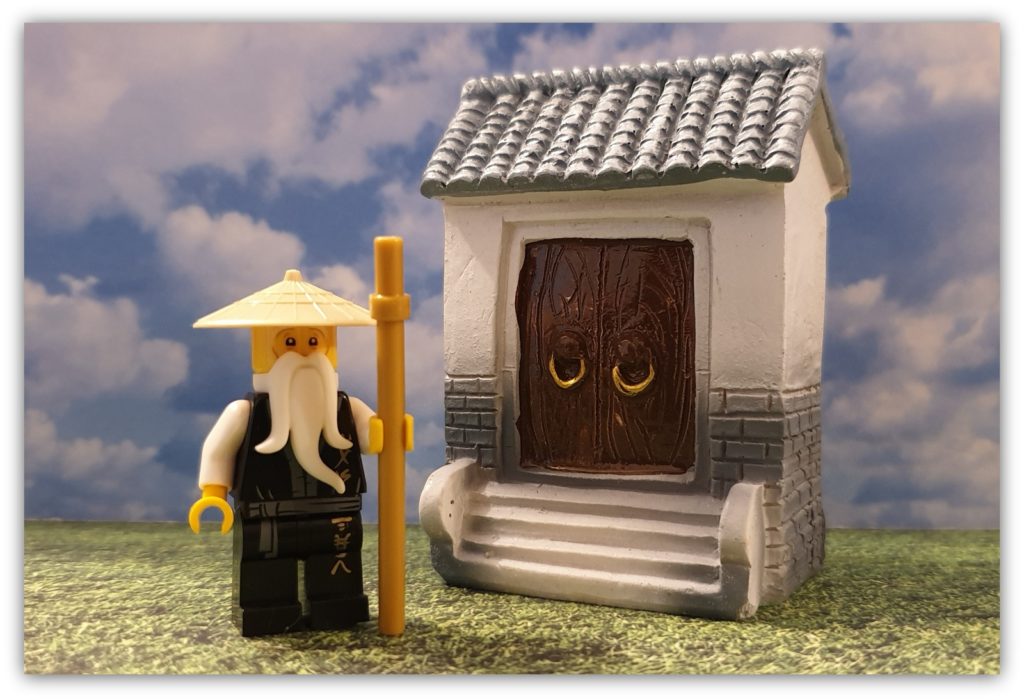 As this article is about the diversity in LEGO, I felt that there was a need to include culture and beliefs. In my opinion, LEGO has always looked to promote the positive nature of life; about getting on with people whatever their faiths and background. That said, in some cases some toy sellers have had other opinions on what might be considered wholesome. The toy shop The Entertainer made the decision to not stock Harry Potter, or the CMF series when it contained the Fortune Teller. Given my perception of the Costume Bear guy, I suspect that it was so named to prevent any form of negative press.

Admittedly the portrayal of witches in LEGO has not really been wholly positive, preferring to use the ‘evil’ witch look in its sets.

LEGO has always tried to avoid promoting specific belief systems; however, sets such as Bionicle and Ninjago (especially in the early days) made light-touch references to elemental-based belief systems to provide some background context to the theme and the characters.

Additionally, when we look to cultural identification, there have been Native Americans and Islanders (such as King Kahuka, above), as well as the previously mentioned Ninjago theme. In all cases and as best as I can recall whilst these sets may have enabled the pre-teen in me to recreate the John Wayne films I had seen, I don’t recall it ever promoting confrontation.

I’ve already mentioned that the principal feature of any toy is to allow the child to develop and learn, so in this final section I’m going to step back a little and look at LEGO from a more holistic level.

One thing that has always impressed me about LEGO is how much it recognises child development and learning through play. As the child develops its ability to comprehend, become more able to fine tune motor controls (i.e. grip things, not build motors into models… but that too) so LEGO will offer sets and models better suited to the capabilities of the child. Additionally, even though the sets may become bigger and more complex, as the basic building bricks are the same, it all becomes very modular and compatible. 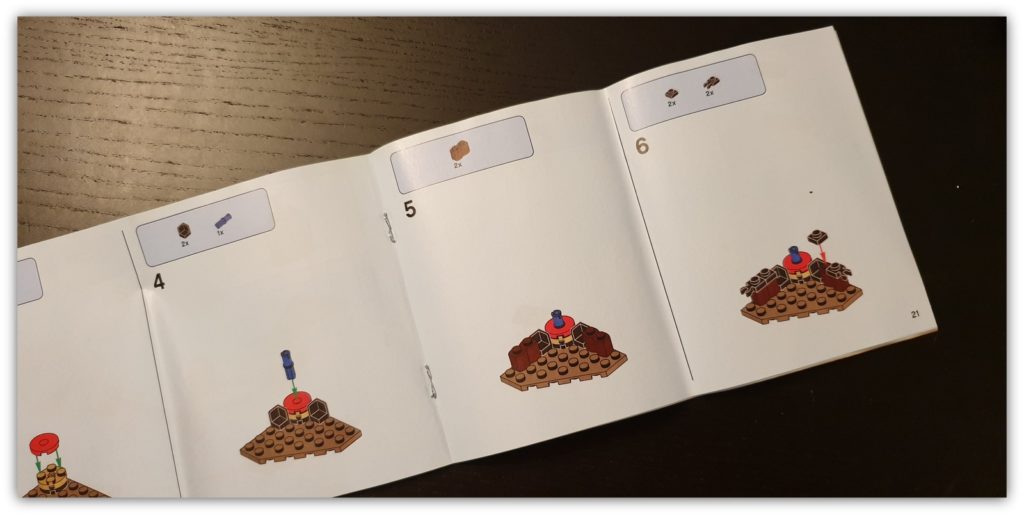 This attention to detail is also reflected in its building instructions. Having constructed many toys from a wide variety of manufacturers, the LEGO instruction manual is well laid out and for the more expert sets contains useful snippets of information about the set, or the subject matter. For example, the rear tire of the Harley Davidson Fat Boy model is 240mm wide on a cast aluminum wheel; for the LEGO set, they produced a 35mm tire which is the widest motorcycle tire ever made in LEGO bricks)

Whilst it might seem that I’m very much in the “Everything is Awesome” camp, there is one thing that LEGO always do which I think is very un-ableist… the provision of stickers in their sets. As soon as that sheet falls out of the packet I have to get my tweezers and practice calm breathing. Generally even with a small set at least one sticker will end up not being exactly where I want it to be. At least when I was building aircraft kits the stickers were water-based and could slide about to the correct position before setting!

But to head back to the positive again… I read recently that LEGO will be introducing bricks for the blind in 2020, called Braille Bricks. This development between the LEGO Foundation, LEGO Group and partners from the blind community will produce bricks that will enable the learning of braille using specially moulded studded bricks.

So how inclusive is LEGO? 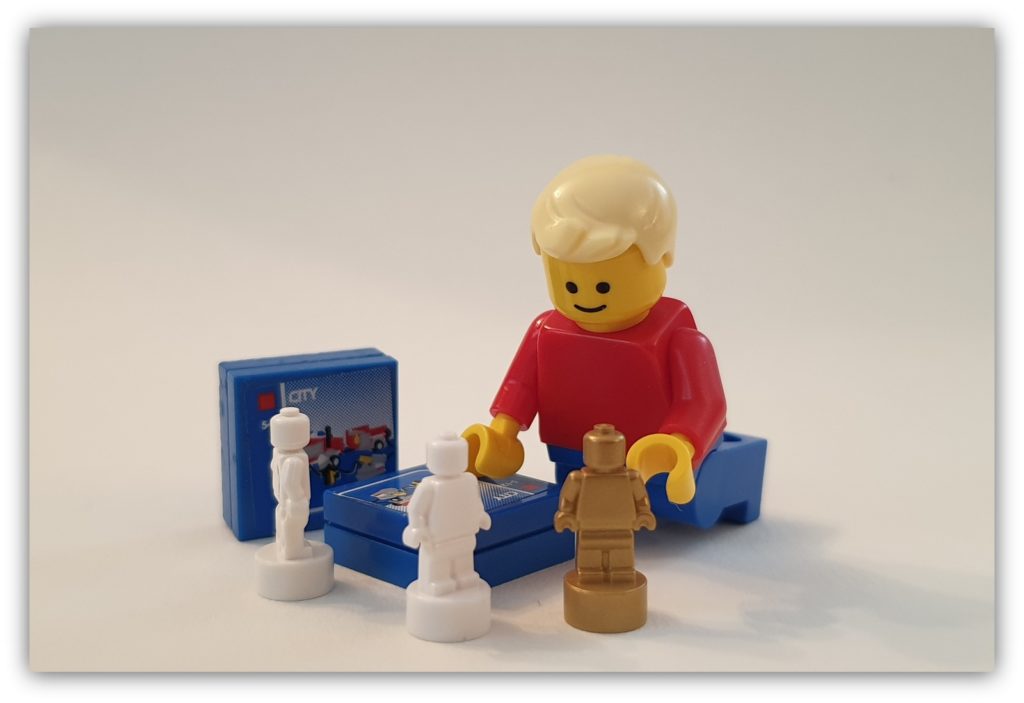 Back in 2014, Charlotte Benjamin (then seven) wrote to LEGO after noticing that the girl figures she saw in LEGO either “sat at home or went shopping” whilst the boy figures had jobs and saved people’s lives. Interestingly perhaps, soon after LEGO Ideas released the female scientist set, with a palaeontologist, an astronomer and a chemist. It could be argued that the change from an all-inclusive toy manufacturer came when it started to chase the movie tie-ins and franchised sets.

Looking around the toy shops I noticed that the stores will tend to have “girls” toys and “boy” toys aisles. So, things like LEGO sets will be distributed (it seems) pretty much by the colour of the box; Friends and Elves end up in the “girls” aisle, City and Star Wars end up in the “boys’ aisle; even if the set is very gender neutral such as “Fun in the Park”.

LEGO is one of the world’s biggest toy manufacturer; that it has expanded its portfolio to include real-world theme parks would suggest that it has a worldwide appeal to both young and the old. I’d use that as the benchmark to say that yes, LEGO is very inclusive, and long may it continue.